Coming Winter Is A Weapon Of War In East Ukraine

December 22, 2014
DONETSK, Ukraine -- A deteriorating humanitarian situation amid the hardship of an approaching winter in east Ukraine is giving the Ukrainian national government an opening to turn the local population against Russian-backed separatists. 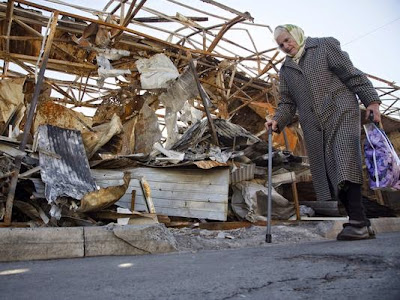 An elderly woman walks past a bombed out street market near the train station in Donetsk, eastern Ukraine. Donetsk, which has lost about 400,000 of its 1 million pre-war population, is bracing for winter.

The government of Ukraine is restoring pensions, salaries and other government services in areas it recaptured from separatists last summer, while cutting off regions still under separatist control, Col. Oleksiy Nozdrachov, Ukraine's chief of military and civilian cooperation in the Donbass region, told USA TODAY.

The result of that hardball tactic: a rise in suffering in separatist-held areas that has turned people against the rebels, as the national government had hoped.

Nozdrachov said during a visit to Washington that there have been protests against rebel leaders in a number of cities, and separatist militias were expelled from at least one village.

Residents in those areas "have dialogue with colleagues and relatives in other areas of Ukraine," Nozdrachov said.

"They see the old territories liberated by Ukrainian forces now are coming back under normal life."

Workers in those areas are receiving salaries and pensions, stores are full of goods, and there are no armed gangs on the streets, he said.

"This shows the population in occupied territory that the situation under the Ukrainian government is much, much better."

The national government has cut off the separatist economy from Ukraine's financial system, government subsidies and health and educational benefits to "apply economic pressure against the rebels and incite locals to rebel," said Janusz Bugajski, an analyst at the Center for European Policy Analysis, a Washington think tank.

On Dec. 15, a report by the United Nations High Commissioner for Human Rights raised alarms that the humanitarian situation in the east risks spiraling out of control.

"With the conflict in the east entering its ninth month, the situation is becoming extremely dire for the population, particularly older persons, children and people in institutional care, many of whom are on the brink of survival," the report said.

About 5 million people in the conflict zone face "further deteriorating due to significant damage of the infrastructure, the breakdown of economic activities, and the disruption of social and medical services and social welfare benefits," it added.

The U.N. said at least 4,700 people have died and more than 10,000 have been wounded in the conflict, as fighting continues despite a declared cease-fire in September.

The Ukrainian government has shut off medical and educational assistance and pension payments in separatist-held areas to prevent funds from falling into rebel hands, exacerbating an exodus to government assistance facilities that are already overwhelmed, according to the U.N. report.

Dmitry Tymchuk, a military analyst and member of the Ukrainian parliament, wrote on his Facebook page in mid-December that there has been "desertion and looting" among rebel ranks in the area south of the rebel stronghold Donetsk, where there also have been clashes between rebel factions.

Col. Sergii Kryvonos, the Ukrainian army's chief of special operations in the conflict zone, said Russian humanitarian convoys — there have been nine so far — delivered supplies to Russian and separatist military units and removed machinery from factories in the Donetsk and Luhansk regions, "making it impossible for the region to be self-sustained."

"We do help and support locals in the area who are suffering, to provide them with everything possible to help them survive in this situation," Kryvonos said in an interview.

Kryvonos said Ukraine expects that loss of public support "will create conditions where rebels and Russia will not be comfortable in their situation and will either be forced to leave or will understand there is no support for their actions and will withdraw from Ukrainian territory."