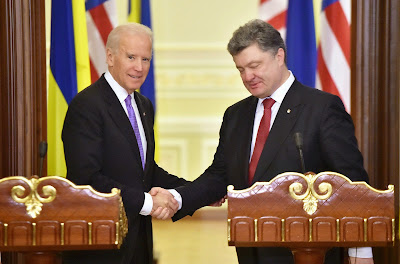 The U.S. is committed to working with partners, including the International Monetary Fund, “to ensure that Ukraine will have the macroeconomic support it needs,” U.S. Vice President Joe Biden told Ukrainian President Petro Poroshenko in a phone call, according to an e-mail statement issued by the White House.

Ukraine wants at least $10 billion in aid to stave off a default as its economy shrinks under the strain of spending cuts and a separatist war, while foreign reserves languish at the lowest in more than a decade.

The government is grappling with the deepest recession since 2009, with the hryvnia plunging 48 percent against the dollar this year and a $17 billion international bailout proving insufficient.

“When do we need financial assistance?” Ukrainian Prime Minister Arseniy Yatsenyuk said after meeting European Union officials in Brussels. “Let me put it in a nutshell: yesterday.”

Poroshenko told Biden he hoped President Barack Obama will sign a bill passed by the U.S. Congress that would impose new sanctions on Russia over the Ukraine crisis.

Signing the legislation will “renew the assurance of solidarity of the American people with Ukraine,” according to a statement on the Ukrainian presidential website today.

Both Poroshenko and Biden urged Russia to ensure “its separatist proxies cease blocking the delivery of humanitarian aid” to eastern Ukraine, the White House said in its statement.

While a Dec. 9 truce in Ukraine’s eastern regions of Donetsk and Luhansk has stemmed fatalities, with no deaths reported since Dec. 11, talks over a lasting peace deal have been delayed in a conflict that’s killed more than 4,700.

Ukraine wants a new round of peace talks as soon as possible and in any format, Valeriy Chaly, deputy chief of Poroshenko’s administration, told reporters in Kiev yesterday.

Plans to restart negotiations in Minsk, where the first truce was signed in September with Russia and the Organization for Security and Cooperation in Europe, have been held up.

The officials agreed that all sides must follow agreements already reached in Minsk and see the need for another meeting in that format, according to the statement.

The U.S and the EU imposed sanctions after Russia annexed Ukraine’s Crimea in March.

Yatsenyuk said Russia’s ultimate goal is “to take over Ukraine and to eliminate Ukraine.”

Poroshenko intends to appoint former acting president Oleksandr Turchynov as secretary of the National Security and Defense Council, according to Interfax, which cited an unidentified source in the presidential administration.

Chaly said talks with the U.S. and the EU on a financial rescue “are about the amount Ukraine needs to conduct reforms and avert default, and the timing of such support.”

He could not state exactly how much the country needed, he said, “but let’s say $10 billion.

"Otherwise, it will be very, very difficult to resolve the issue.”

Ukraine is seeking to unlock the next tranche of an IMF-led rescue and plans to approve a 2015 budget prepared by the country’s new government on Dec. 26.

The yield on dollar-denominated government bonds due in 2017 is at a record after soaring more than 3 percentage points yesterday.