December 02, 2014
KIEV, Ukraine -- Some reports, especially those on the pro-separatists side seem to be a bit exaggerated but, as Ainonline website reported, on the basis of Ukrainian and British sources, the Ukrainian Air Force has lost 22 aircraft throughout the crisis. 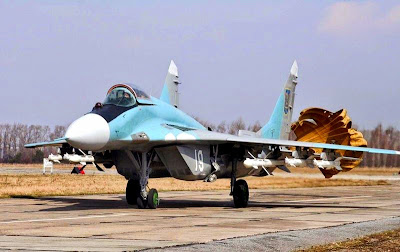 It's hard to say how many aircraft Ukrainian Air Force (UAF) has lost.

Ukrainian military aviation had not been in a very good shape before the hybrid-conflict with the separatists started, and any losses may be considered to be severe.

The total loss count includes 9 combat planes, 3 cargo planes and 10 helicopters, most of which have been shot down with MANPADS (Man Portable Air Defense Systems) and, in case of some of the lost helicopters, with rocket propelled grenades.

In total, the UAF conducted 740 sorties during the operation, which is dubbed by the Kiev government to have an “anti-terrorist” character.

Starting from losses within the group of combat planes, one Su-24 Fencer, six Su-25 Frogfoots and two MiG-29 Fulcrums have been lost, where one of the Fulcrums was reportedly shot down by a Russian MiG-29.

The cargo planes which have been lost include single examples of An-26 Curl, An-30 Clank and Il-76 Candid.

The Curl was reportedly hit by a Buk missile system; the same type of anti-aircraft system behind the downing of MH17 flight (according to most analysts).

The Il-76 mentioned above was shot down in Luhansk, and it was a Candid in a flight of three such planes landing at Luhansk at the time.

The first Candid made a safe landing, while the crew of the last one aborted landing.

The British sources state that lack of proper flight experience and intelligence data was the main reason for the incurred losses.

The ECM systems on the Ukrainian jets have been made in Russia, which means that they were easy to overcome.

According to the Polish outlet altair.com.pl, the Western countries were asked to supply new electronic countermeasures, however in fear of these being intercepted by the Russians, they were never delivered.

In the light of the analysis of the potential of the Ukrainian Air Force conducted by Dr Sean Wilson, which has been published in the Polish “Lotnictwo” magazine last year, the above losses may be considered to be significant.

Back in 2013 the estimated data suggested that out of these numbers only 200 combat aircraft were in active service and about 70 were combat capable.

Reports claim that 80 Frogfoots remain in active service and at least 14 are combat-capable.

Ukraine also had 66 examples of Su-27 Flankers, respectively 40 Su-27S Flanker-B’s (which are capable of conducting air-to-ground sorties), and 26 Su-27P Flanker-B’s (interceptor variant) and Su-27UB Flanker-C’s (two-seater). 36 of these were to remain in active service, while 16 were to be fully operational.

All of the Flankers are being currently used as interceptors.

Modernization of these has been planned, and some examples have been updated before the conflict started.

When it comes to cargo planes, Ukrainians inherited 180 Candid-B transport aircraft, however, not many of these remained active.

Two examples of An-30 Clanks were said to be still flying within the Open Skies program.

About 20 Il-78 air tankers have been also a part of the post-Soviet inheritance; nonetheless the refueling equipment on these has been removed and maximally 8 of them remained active back in 2013 in a cargo role.

When it comes to the qualitative side of the analysis, the Ukrainian AF undertook several modernization programs for both fighters and attack aircraft.

The modernizations included new avionics and navigational systems based on both GPS, as well as on its Russian counterpart – GLONASS.

Still, the Ukrainian Air Force suffered considerable losses during such a limited conflict a sign that the weapons in the hands of the separatists have been extremely effective against Kiev’s combat planes and helicopters so far.