A Pastor’s Turn Fighting For Ukraine

December 14, 2014
PISKY, Ukraine -- Sergei I. Reuta was in many ways typical of the 15,000 to 18,000 volunteers who, loosely organized in about 30 battalions, have emerged as the backbone of the Ukrainian military in the war in southeastern Ukraine. 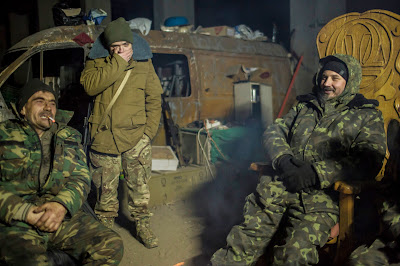 Sergei I. Reuta (R), and other Ukrainian army soldiers in Pervomaiske, Ukraine.

Fired by a religious passion and a desire to remake their country, Mr. Reuta and others like him have left behind families and careers to join groups like his Dnipro-1 battalion — named for the city it came from, Dnepropetrovsk.

“I understood that as a Christian I should defend the land where God put me,” Mr. Reuta, a Pentecostal minister, said in an interview last month.

“And I understood there was no escape from armed conflict.”

After years of neglect, the Ukrainian Army was wormy with corruption, and its Soviet-trained senior leadership of uncertain loyalty in a conflict with Russia.

Volunteers made food for the regular soldiers, gave them clothing and even weapons.

Increasingly, as the fight with rebel separatists and Russian special forces exploded in the spring and summer, they fought alongside them.

“The army is morally strong because of us,” said Mr. Reuta, who was called Padre in his unit.

“They see we are here, just like them, fighting beside them.”

Recently, Mr. Reuta talked at length about why he had set aside his work as a pastor to put on camouflage and pick up a Kalashnikov rifle.

Last spring, he said, men he is certain were Russians came to his hometown in eastern Ukraine and beat up members of his congregation.

“It was clear from their speech, from their behavior, that they were Russians, and they said they came to bring order to our region,” he said.

Mr. Reuta said he had nothing against Russians or the Russian language.

His was not on a nationalistic crusade he said, which put him and members of Dnipro-1 at odds with many others in the volunteer battalions, who come largely from areas of western Ukraine.

In Dnipro-1, Russian is the language of commands, radio traffic and banter, even as its members fight the Russian-backed separatists.

“This is not just Putin, but a thought process,” of Soviet-style leadership, he said, that must be resisted.

“The group of men around Putin, those who whisper in his ear, they think the same way. It’s an old idea” revived today, he continued.

The militias, though, are a mixed lot.

Rights groups accused one, Aidar, of illegal detentions and other abuses.

Another group, Azov, stained the new Ukrainian government’s reputation using a “wolf angel,” a Swastika-like symbol, on a flag.

One Azov nationalist fights with “SS” inked on his helmet.

“We have a cross-section of Ukraine,” in the militias, said Mr. Reuta, 44, with a slight paunch and salt-and-pepper beard.

Like others in his unit, he spent a good deal of time roasting and grilling food on a campfire at his position, called The Bridge, a sandbagged refuge under a freeway overpass where he often held court.

At one point recently, he poked from the coals his specialty, potatoes roasted in aluminum foil together with bacon and pickles, a diabolically tasty mix.

To get to the hideaway by car, soldiers in the Dnipro-1 volunteer militia accelerated along an open stretch of road exposed to the pro-Russian lines, the windows of their cars rolled down, Kalashnikovs pointing out.

If they made it through, they coasted to a stop under the safety of the overpass.

Once there, they took off their gloves and flexed their cold-stiffened fingers.

Regular army soldiers rumbled in on tanks, then piled out to see what was cooking.

Reporters covering this part of the front near the contested Donetsk airport at times became stranded at this waypoint, for hours or overnight if no rides could be found.

He said that several middle-aged men in his congregation back home had volunteered to join the paramilitaries, and some had died.

“Who else, if not us?” said Mr. Reuta, whose wife and three children had sought the safety of Kiev.

“Should we send the young men, those who have not yet gotten to know God?”

On the night of Nov. 22, Mr. Reuta was deployed in the village of Pisky along with Grigory V. Matiash, a veteran of the street protests in Kiev.

They had taken shelter in an abandoned house near the neutral zone between the warring lines, when a barrage began.

As the shells came in, announcing themselves with whistles and booms, the room where Mr. Reuta was crouching took a direct hit, killing him.

Mr. Matiash, who was in another room, was unscathed.

“We all respected him,” Mr. Matiash said of Mr. Reuta.