November 12, 2014
KIEV, Ukraine -- At home in Ukraine, she has been hailed as a hero and elected to parliament. 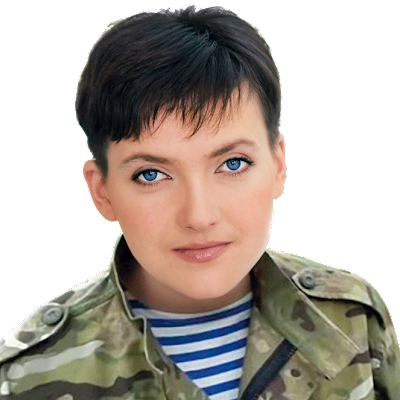 In Russia, the soldier is being threatened with life in prison.

The fate of Nadezhda Savchenko is being exploited by both sides.

Short, dark brown hair, a serious look in her eyes, dressed in a white T-shirt emblazoned with a trident, Ukraine's national emblem: when Nadezhda Savchenko last appeared before Russian judges in Moscow, it was as if all of Ukraine was in the dock.

"I'm tired of Russia's lies, your deceitful judges and your dishonest media," she said, speaking directly to the TV cameras as she was led away by a dozen police officers, like a hardened criminal.

She spoke in Ukrainian, her voice full of contempt and anger.

Savchenko, 31, is the most prominent prisoner of about a dozen Ukrainians who are being detained in Russia for "political reasons," according to the Ukrainian Foreign Ministry.

Even the renowned Russian human rights organization Memorial sees Savchenko as a "political prisoner" and has called for her release.

Savchenko, a trained military pilot who over the summer fought in the volunteer Aidar Battalion against pro-Russian separatists in eastern Ukraine, is facing murder charges.

Russian investigators have accused her of tipping off the Ukrainian army to the location of two Russian journalists in mid-June.

Both were killed in an attack near the city of Luhansk.

Afterward, according to Moscow investigators, Savchenko is said to have illegally entered Russia as a refugee.

She has denied any guilt, insisting she was captured by pro-Russian separatists and brought secretly across the border in the southern Russian city of Voronezh, only to resurface in a remand center.

Despite objections from her lawyers, Savchenko was then brought to a Moscow clinic and forced to undergo psychiatric examinations.

In October, her lawyers filed an appeal against the examinations.

On Tuesday, a Moscow court will decide whether her complaint is valid.

The results of examination will decide whether or not Savchenko is able to stand trial.

Back home in Ukraine, Savchenko has been celebrated as a hero and martyr ever since her capture.

Referencing the 1997 American movie "G.I. Jane," starring Demi Moore, the media has presented Savchenko as a brave soldier and fighter.

She is one of the few women serving in the Ukrainian air force.

"Actually, she had wanted to become a war correspondent," said her mother, Maria Savchenko, in an interview with DW.

But she didn't have enough money for her studies and so became a professional soldier.

As the only woman in the Ukrainian forces able to fly the Russian Mi-24 attack helicopter, Savchenko took part in the Iraq deployment in 2004 and 2005.

Ukraine was part of the US-led coalition.

Ukrainian politicians have called on Russia to release Savchenko; President Petro Poroshenko is said to have repeatedly addressed her fate in talks with his Russian counterpart, Vladimir Putin.

But Kiev's demands have fallen on deaf ears - as has the letter written by her 77-year-old mother to Putin:

"I beg you to release my dear daughter," it reads.

At the end of October, Savchenko hopes for release were renewed: In the early parliamentary election, former Prime Minister Yulia Tymoshenko, of the Fatherland Party, put Savchenko at the top of her electoral list and Savchenko was elected to parliament.

Critics, however, have accused Tymoshenko of using Savchenko's popularity to boost her own image.

As an elected parliamentarian, Savchenko now enjoys immunity from prosecution.

"Ukraine will not get Savchenko back," said a source in the Russian judiciary, quoted by the Interfax news agency.

Observers expect Moscow intends to severely punish Savchenko in a show trial, similar to the 2012 case of the political punk band Pussy Riot.

One of Savchenko's Russian lawyers, Mark Feygin, also represented members of the band.