November 08, 2014
DONETSK, Ukraine -- Ukraine’s military said it killed as many as 200 rebels in an attack in Donetsk, inflicting the biggest blow from either side in the conflict in more than two months and removing pretense that a Sept. 5 truce is holding. 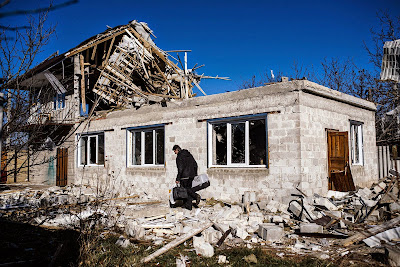 A man carries his belongings as passes by his destroyed home following shelling in the Kuybeshevski area in Donetsk on Nov. 6.

Accusing Russia of sending dozens of tanks and other military vehicles across its border yesterday into separatist-held areas in eastern Ukraine, military spokesman Andriy Lysenko said Ukraine’s army was preparing for “an adequate reaction.”

Lysenko said artillery strikes had killed the rebels and destroyed tanks and other armored vehicles after Ukrainian forces took fire at the Donetsk airport, where they have faced almost daily attacks.

Rising tension between the former Soviet republics is threatening to escalate back into the open separatist war that broke out after the February ouster of Russian-backed president Viktor Yanukovych and Vladimir Putin’s annexation of the Crimean peninsula from Ukraine a month later.

“Both sides seem to be shaping up, readying now for further conflict,” Tim Ash, chief economist for emerging markets at Standard Bank Group Ltd., said in an e-mail.

“Not seeing much on the diplomatic front in terms of de-escalation.”

Animosity between the government in Kiev and pro-Russian rebels in Donetsk and Luhansk rose this week after the separatists held Nov. 2 elections condemned by the U.S. and European Union as illegitimate and a violation of the two-month-old cease-fire.

While they’ve blamed Russia, who said it “respected” the results, for inciting the conflict by delivering cash, weapons and fighters to the region, Putin says his country isn’t militarily involved.

Both sides have accused each other of breaking the truce agreed in Minsk, Belarus, with the Ukrainian government saying it’s suffered more than 100 killed and about 600 wounded since the cease-fire came into force.

The artillery strikes at the Donetsk airport yesterday were a response to rebel shelling with surface-to-surface Grad missiles, mortars and howitzers that killed five soldiers and wounded 16, Lysenko said.

Lysenko said 32 tanks, 16 howitzers, and 30 trucks with ammunition and manpower crossed the border from Russia into Luhansk yesterday.

The ruble has fallen 30 percent against the dollar this year, the world’s second-worst performer behind Ukraine’s hryvnia.

Russia’s RIA Novosti state news service quoted Andrei Purgin, deputy premier of the self-proclaimed Donetsk People’s Republic, as saying that Ukraine had begun a large-scale offensive against the separatists in the east.

Purgin said he sees “all-out war” and said Ukrainian forces had broken the Sept. 5 truce, according to RIA.

Igor Girkin, a Russian who fought for the rebels as defense minister for the Donetsk People’s Republic under the nom de guerre Igor Strelkov before returning home earlier this year, called on Putin to “take actions to stop this murderous war,” according to an interview with LifeNews today.

“The people who came to power in Kiev are the enemies of Russia,” he said.

The Russian population in Ukraine “needs to be defended.”

Ukrainian President Petro Poroshenko told German Chancellor Angela Merkel during a telephone call today that “a significant deviation from the Minsk protocol is leading to further escalation in the conflict,” according to a statement on the website of Poroshenko’s office today.

Both repeated a call for a total cease-fire, Merkel spokesman Steffen Seibert said in a separate statement.

In August, according to NATO and Ukraine, Russian forces helped rebels in the Donetsk and Luhansk regions wage a counteroffensive to break out after they were encircled by Ukraine’s army.

NATO fighter jets intercepted a Russian military aircraft over the Baltic Sea, the latest in a series of similar incidents that have grown in frequency.

Latvia said today it spotted two Russian naval vessels near its territorial waters, a day after it said F-16s based in the Baltic region intercepted a Russian IL-20 surveillance plane, according to its Twitter account.

Ukraine’s military said Russia’s air force had put some of its units on high alert.

A spokesman for Russia’s armed forces said by phone that he wasn’t able to comment.