November 10, 2014
MOSCOW, Russia -- A leader of Ukraine’s separatists met with senators in Moscow, solidifying ties with Russia after holding elections that were condemned by the U.S. and Europe. 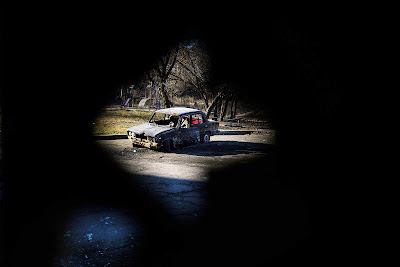 A destroyed car is seen through a shrapnel hole in Donetsk.

Andrei Purgin, deputy premier of the self-proclaimed Donetsk People’s Republic, attended a meeting today on eastern Ukraine in the Federation Council, Russia’s upper house of parliament, where he advocated using rubles for some transactions.

Meanwhile, Ukraine accused Russia of stepping up efforts to reinforce rebels with arms and supplies.

Purgin’s visit to Russia risks further undermining a Sept. 5 truce that both sides accuse each other of violating daily.

The government in Kiev said rebel elections last week contravene the cease-fire pact, a position that’s shared by the U.S. and the European Union.

Russia has said it respects the ballots.

“Purgin isn’t the first separatist representative to travel to Moscow, but his visit comes in the context of escalating violence,” Otilia Dhand, an analyst at Teneo Intelligence in London, said today by e-mail.

“Purgin’s visit points to what will probably follow afterwards: the consolidation of separatist territorial control with Moscow’s support.”

The violence has contributed to making the ruble the world’s worst-performing currency against the dollar over the past three months with a 20 percent plunge.

It strengthened 2.7 percent this morning in Moscow, advancing for a second session, even as the central bank said Russia’s economy probably won’t grow next year as U.S. and EU sanctions bite.

Ukraine’s hryvnia weakened 2.2 percent to 14.52 per dollar in Kiev.

Local lenders agreed with the central bank not to allow the currency to slip beyond 15-16, the Interfax news service reported, citing an unidentified person who attended a meeting today between the two parties.

Purgin told the Russian senators that the rebels may set up a dual ruble-hryvnia currency zone following the Nov. 2 elections.

He said high turnout at the ballots “is a sign people trust the current authorities.”

He was joined in Moscow by Alexei Karyakin, chairman of the self-proclaimed Luhansk People’s Republic’s Supreme Council.

The Luhansk rebels will establish a fully functioning state before deciding whether to seek to join Russia, Karyakin said.

“Russia is giving additional legitimacy to the breakaway regions even though it doesn’t officially recognize them,” Evgeniy Minchenko, head of the International Institute of Political Expertise in Moscow, said by phone.

“The Kremlin isn’t ready to officially accept the republics yet and maintains Ukraine should remain united, at least formally.”

In eastern Ukraine, the conflict is threatening to return to the same open warfare that broke out after the February ouster of Russian-backed President Viktor Yanukovych and Putin’s annexation of the Crimean peninsula from Ukraine a month later.

As the meeting in Moscow took place, there were reports of more fighting.

Sporadic weapons fire was heard throughout the night in Donetsk, the combat zone’s biggest city, according to the local council.

The rebels are attacking Ukrainian positions using tanks, artillery and mortars, with two soldiers killed and five hurt in the past 24 hours, military spokesman Andriy Lysenko said today in Kiev.

Russia is continuing to send personnel and arms to the militants, according to Lysenko.

The Organization for Security and Co-operation in Europe said in a statement Nov. 8 that convoys of unmarked trucks and tanks were seen in the city of Donetsk and nearby Makeevka.

The column was moving for “tactical reasons,” he was cited as saying.

Russian Foreign Minister Sergei Lavrov, speaking Nov. 8 in Beijing at a news conference with U.S. Secretary of State John Kerry, declined to comment on whether Russia had sent troops and tanks into Ukraine.

German Foreign Ministry spokeswoman Saswan Chebli said the information about the convoy is difficult to verify.

“There are reports that separatists again secretly brought material into the combat zone,” she told reporters today at a government news briefing in Berlin.

“We have no hard independent evidence of that.”

All sides to the conflict should avoid “any re-escalation of hostilities,” EU foreign policy chief Federica Mogherini said in a statement yesterday.

Russia should “fully assume” responsibility for keeping weapons and fighters from crossing its border into Ukraine.

“The most recent reports by the OSCE Special Monitoring Mission in Ukraine about convoys in separatist held areas with substantial amounts of heavy weapons, tanks and troops without insignia moving westwards represent a very worrying development,” Mogherini said.

At least 4,035 people have been killed and 9,336 wounded in the fighting in eastern Ukraine, the United Nations estimates.

There’s a risk of that violence moving up a gear again, according to Joerg Forbrig, senior program officer at the German Marshall Fund of the U.S. in Berlin.

“The separatists and their Russian supporters are renewing the conflict after pausing for elections,” he said by phone.