November 19, 2014
DONETSK AND LUHANSK REGIONS, Ukraine -- Ukraine's military is preparing to repel a possible assault by Russian-backed rebels in the east following reports of Russian military reinforcements crossing the border. 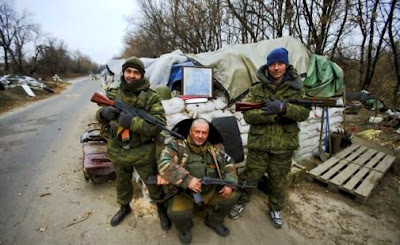 Pro-Russian separatists pose with a picture of Josef Stalin at checkpoint in the Spartak area near the Sergey Prokofiev International Airport in Donetsk, Nov. 18, 2014.

Ukraine's President Petro Poroshenko said Monday in an interview with the German daily Bild that the country is ready for total war.

Ukraine's military is beefing up its defenses just a few kilometers from rebel-held territory in the Luhansk region.

Private Sergei Eava with the 39th battalion says the Ukraine soldiers have to be prepared.

“We received information that our guys were being shelled … yesterday with artillery and grads [rockets],” Eava said.

The captain and commander of the new checkpoint, who asked to be called Andriy, says they have plenty of ammunition but could use more men.

“We came here two days ago. We didn’t have any conflicts here with the other side yet, but they say that there are small groups working here, about 10 people in a group," Captain Andriy said.

"We received this intelligence information.”

A Ukrainian soldier suddenly fires his machine gun toward rebel positions in front of a group of journalists, saying, “Warning shots.”

The post comes under frequent rebel fire and was hit by a grad rocket the day before, although no one was injured.

Senior Mortar Gunner Vyachelav says they are ready to fight off an assault.

Captain Andriy Slota, squad commander, says they have new munitions, but the men are tired.

“It’s time to end this singing and dancing and decide whether to move forward [militarily] or solve this on some legal level to let people go [demobilize soldiers]. Or, just return our country to us and let people go," Slota said.

"Enough is enough. The time has come.”

Moscow has repeatedly denied directly supporting the rebellion in eastern Ukraine, and has described Russian troops seen fighting alongside pro-Russian separatists in the east as volunteers.

The rebels, fighting against the pro-Western government in Kiev, said they fear it is the Ukrainian forces who are planning an offensive.

Speaking Tuesday in Brussels, Stoltenberg urged Moscow to pull back its troops and "contribute to a peaceful settlement" in Ukraine, where pro-Russian separatists have been fighting Ukrainian forces in the country's east.

He said Russia's behavior will continue to require responses.

Putin US trying to 'subdue' Russia

Addressing a meeting of supporters in Moscow on Tuesday, President Vladimir Putin accused the United States of seeking to "subdue" Russia, just days after receiving a frosty reception at the G20 meeting in Australia and following fresh accusations that Moscow is putting increasing military pressure on Ukraine.

Asked whether the United States is trying to "humiliate" Russia, Putin said the U.S. is seeking to "subdue us," to "solve their problems at our expense" and to "bring us under their control."

He added that no one has ever been able to subjugate Russia, and never will.

Also, Germany's foreign minister Frank-Walter Steinmeier called on all parties to the conflict to abide by a September ceasefire agreement between Kiev and the rebels.

Steinmeier spoke to reporters in the Ukrainian capital, ahead of a visit to Moscow.

In London, British Foreign Secretary Philip Hammond said that Russia "has to be consistently reminded of its obligations" under the agreement.

According to figures from the United Nations, the seven-month conflict in Ukraine has claimed over 4,100 lives and left nearly 10,000 wounded.