Ukraine Is Heating Up Again

November 07, 2014
LUHANSK, Ukraine -- Russian tanks and men are reportedly rolling into Ukraine again, a day after Russian President Vladimir Putin met with top military officials to discuss the "deterioration of the situation" in the east of the country. 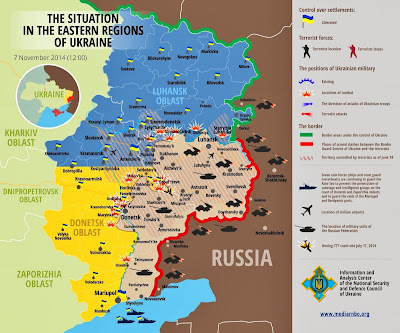 Ukraine says a convoy made up of 32 tanks, 16 howitzer cannons, and 30 trucks of troops and equipment crossed the border into the rebel-controlled Luhansk region, Sky News reports.

Kiev denied this, saying the army remained in agreed positions.

The fighting is along the fault lines that have been extended by Russian-backed separatists over the last two months.

Russia is also charging Ukraine with deliberately shelling a school, although The Interpreter reports that Moscow has not provided evidence and public information does not point to Ukraine military positions.

Representatives of the separatist regions earlier put out a joint statement calling for a redrafting of the Minsk deal, which established a cease-fire in exchange for Kiev granting "special status" to eastern territories.

Rebels say Ukraine has violated the deal by seeking to revoke a law that would have granted eastern regions autonomy.

Kiev says this was a consequence of Sunday's separatist leadership elections, which it says go against the agreement.

At least 4,000 people have died during the conflict.

Mr. Ushakov and Mr. Putin you whether recognize elections in DNR and LNR or you do not, and you should act accordingly.
You can not be a little pregnant, you whether pregnant or you are not.
At the moment your actions confirmed that you 100% recognized those illegal elections.
You can not mislead the world.
1:09 PM

Such issues must be addressed as soon as possible. This is not the way to treat population on Government controlled territories of DonBas.
3:49 PM