November 23, 2014
KIEV, Ukraine -- Here’s how a post-Soviet military improvises when it gets into a war it never prepared for. 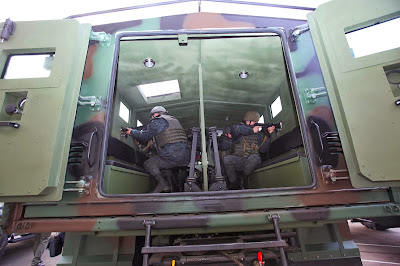 The Ukrainian army is fielding armored battle trucks that look like something from Mexico or Kurdish Syria.

Known as Raptors, the new trucks are for Ukrainian national guard troops fighting pro-Russian separatists in the east.

There are several versions, though they’re all based on six-wheeled KrAZ trucks—except covered in armored glass and plates capable of stopping 7.62-caliber machine gun rounds.

The trucks should also keep their occupants protected from mines that weigh up to 13 pounds.

Plus, the Raptor can shoot on the move.

The trucks have room inside for up to 24 soldiers and gun ports for about half as many.

“The vehicle is ready for combat conditions,” Arsen Avakov, Ukraine’s interior minister, wrote on his Facebook page on Nov. 22.

Add it to the list of crowdfunded hardware and radio-controlled hobby planes to quadrotor drones—a low-cost means of artillery reconnaissance.

When Ukraine’s army mobilized in the spring to fight the separatists, troops who couldn’t hitch a ride in armored vehicles rode into battle inside soft-skinned cars, buses and armed, camouflaged pickup trucks known as technicals.

This put the soldiers at grave risk from ambushes—if the separatists could catch them inside their vehicles.

The Ukrainians are repeating the same process the American military went through in Iraq and Afghanistan.

Still, the separatists have captured lots of weapons—from machine guns up to anti-tank missiles and T-64 tanks.

They have a threatening amount of Russian-supplied T-72 tanks.

They wield modern ASVK anti-materiel rifles known only to belong to the Russian army.

The militants’ shoulder-fired, thermobaric weapons and rocket-propelled grenades are some of the best produced by the Russians arms industry—including the single-shot RPG-26.

Even their projectiles pack a considerably heavier punch than their equivalents in the Middle East.

“Unlike recent conflicts in the Middle East and North Africa, where RPG-7 and other older rocket-assisted projectiles have proved the dominant types, the conflict in Ukraine has showcased the use of far greater quantities of more recent projectile types,” arms-tracking consultant firm ARES noted in a recent report.

The Raptor won’t provide as much protection against all that.

But it’s a start.

Don’t be surprised if more—and heavier ones—start appearing in the Donbass.