November 07, 2014
DONETSK, Ukraine -- NATO sources have confirmed the Russian military invasion of Ukraine after a column of 32 Russian tanks entered the country.. 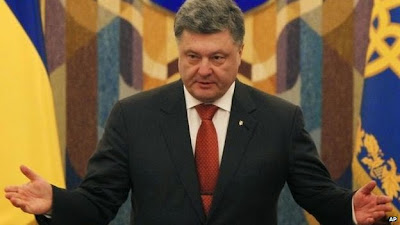 The convoy made up of 32 tanks, 16 howitzer cannons and 30 trucks of troops and equipment crossed the border into the rebel-controlled Luhansk region.

A fragile ceasefire has been in place since 5 September, although hundreds of people have been killed since then.

More than 4,000 people have died since fighting erupted in April after pro-Russian separatists seized control in the regions of Donetsk and Luhansk.

The European OSCE monitoring mission has warned that the "bloodletting" is still going on, with numerous incidents of shelling.

Fears of a return to full-scale conflict were raised after the rebels held elections on Sunday in defiance of the government in Kiev and Western countries.

"The deployment continues of military equipment and Russian mercenaries to the front lines."

Russia has recognised Sunday's vote which led to separatist leader Alexander Zakharchenko, 38, being sworn in as head of the self-declared Donetsk People's Republic.

Igor Plotnitsky, a 50-year-old ex-Soviet army officer, was declared head of the self-proclaimed Luhansk People's Republic, further to the east.

President Petro Poroshenko has accused the rebels of tearing up a peace deal and said a law granting the rebel-held regions partial autonomy would be scrapped.

He has ordered reinforcements to key cities in case of a rebel offensive.

But the separatists hit back on Wednesday, arguing that it was the scrapping of the special status deal that broke the peace agreement.

Although Mr Poroshenko insisted he had not given up on the peace plan, he said Ukraine had to "repel possible attacks" and not allow the "spread of this cancerous tumour".

Unknown said…
The best know treatment of a cancerous tumor is a surgical intervention.

Ukrainian - Russian border must be under Ukrainian control and rebels must be disarmed, or else.
1:00 PM

Scrat335 said…
Or else what? The Ukies are going to do something about it? LMAO!!! Considering the slaughter in July and August I know who I'm betting on. The only cancer there is in Kiev.
3:10 AM