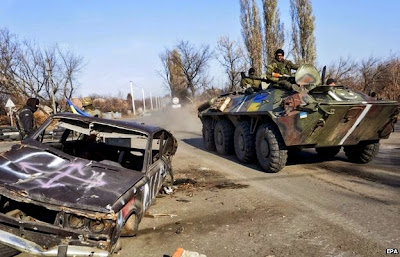 President Poroshenko has called for troop reinforcements to be sent to defend several Ukrainian cities.

They were responding to Mr Poroshenko's call to cancel partial autonomy granted to two eastern regions as part of a ceasefire agreement.

The Ukrainian president and Western countries say a rebel vote held in the east on Sunday violated the Minsk deal.

He has ordered reinforcements to key cities in case of a rebel offensive.

More than 4,000 people have died in eastern Ukraine since the conflict began in April and the European OSCE monitoring mission has warned that the "blood-letting" is still going on with numerous incidents of shelling.

A civilian was reported killed and several others wounded in mortar attacks on Donetsk on Wednesday.

Clashes were also heard around Donetsk airport, AFP news agency said, where government forces have been holding out against rebel attack.

Although Mr Poroshenko insisted he had not given up on the peace plan, he said Ukraine had to "repel possible attacks" and not allow the "spread of this cancerous tumour".

Russia has recognised Sunday's vote which led to separatist leader Alexander Zakharchenko, 38, being sworn in as president of the self-declared Donetsk People's Republic.

But Ukraine and the EU say the vote should have been held on 7 December and run by the central government in Kiev.

In a joint statement on Wednesday, the two self-declared republics said Mr Poroshenko's "unilateral" decision to cancel a law providing their regions with special status "essentially put a line through the Minsk agreement" of 5 September.

There are increasing fears that the lower level of violence since the deal agreed in Belarus may explode once again.

NATO Secretary-General Jens Stoltenberg said on Tuesday that Russian troops had recently been seen moving closer to the border with Ukraine and Moscow was continuing to train the separatists.

There have also been reports of troop movements within rebel-held areas.

However, while the Minsk deal risks unravelling, the first part of an agreement reached last Friday to resume Russian gas supplies to Ukraine has gone through.

Russian state-owned gas giant Gazprom said it had received $1.54bn (£970m; €1.2bn) from Ukraine's Naftogaz, the first instalment of a $3.1bn payment of debt for gas dating back to late last year.

Ukraine's gas supplies were turned off in June in a row over unpaid bills and a sharp increase in gas prices.

Russia annexed Ukraine's southern Crimea peninsula in March, after protesters in Kiev ousted pro-Russian President Viktor Yanukovych from power, prompting separatists to take over the Donetsk and Luhansk regions in the east.