November 04, 2014
KIEV, Ukraine -- Ukraine's president is to chair a crisis meeting of security chiefs, after a rebel-held vote that he said jeopardised "the entire peace process". 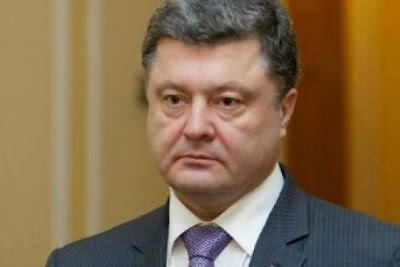 Petro Poroshenko proposed scrapping a law, agreed under the 5 September truce deal, which gives special status to the eastern Donetsk and Luhansk areas.

Under the truce, the regions were to hold Ukraine-run elections in December.

The two pro-Russian separatist leaders declared to have won Sunday's polls are being sworn in.

Western states say the rebel-held elections were illegal but Russia backed them.

More than 4,000 people have been killed in fighting in eastern Ukraine since April.

Ukraine accuses Russia of arming the rebels and sending Russian regular troops across the border - a claim denied by Moscow.

If Ukraine's security council accepts President Petro Poroshenko's proposal, it may be just a symbolic gesture.

After all, the two breakaway eastern regions already have declared their own "special status" by setting up their own governments and holding elections.

But Mr Poroshenko may go even further.

He is under enormous pressure right now to show that he is not allowing the two statelets to cement their positions, and create a frozen conflict.

Tellingly, in his statement the Ukrainian leader did not say he would scrap the Minsk peace plan altogether, saying instead he would recommend "adjustments" to it.

But the insurgents and their backers in Moscow may say any changes to the agreement that Kiev undertakes are tantamount to revoking it.

Given the heavy artillery and fighters seen streaming into the region recently, the future of the shaky truce seems very much under doubt at the moment.

Addressing the nation on TV late Monday, President Poroshenko said he would hold a meeting of Ukraine's Security and Defence Council on Tuesday to propose abolishing the law granting special self-government to rebel-held areas.

He described the 2 November "pseudo-elections" in Donetsk and Luhansk as a "farce at gunpoint" which would never be recognised as legitimate.

Sunday's polls, he said, were "a gross violation" of the Minsk agreement - a roadmap to a peaceful settlement agreed by Ukraine, Russia, the Organization for Security and Co-operation in Europe (OSCE) and also rebel delegations.

"We demonstrated to residents of the Donetsk and Luhansk regions, as well as to the whole world, that we are sincere in our desire for political settlement," he said.

"The militants refused this opportunity."

Ukraine and the West have always insisted the rebel territories must abide by the Minsk deal and hold the local elections under Ukrainian law in December.

The US said it condemned the "illegitimate, so-called 'elections' held on Sunday" and was "concerned by a Russian foreign ministry statement that seeks to legitimise [them]".

EU foreign policy chief Federica Mogherini said the polls were "a new obstacle on the path towards peace", while Germany said Russia's backing of the vote was "incomprehensible".

Russia earlier said it respected "the will of the people of the south-east".

It called for a "sustainable dialogue" between the authorities in Kiev and the rebels.

Alexander Zakharchenko, the self-declared prime minister of the Donetsk People's Republic before his election on Sunday, was inaugurated as its president at a ceremony in a city theatre on Tuesday.

Speaking to reporters, he said he was ready for peace "talks with anyone including Petro Poroshenko", Interfax news agency reports.

He also laid claim to the entire Donetsk region, parts of which remain under Ukrainian government control, for the DNR.

The incumbent rebel prime minister in the Luhansk People's Republic, Igor Plotnitsky, was also due to be sworn in on Tuesday.

Both the government and rebel sides have repeatedly violated the ceasefire agreed in September.

The separatist insurrection erupted in the east after Russia annexed Ukraine's southern Crimea peninsula, weeks after Ukraine's pro-Russian President, Viktor Yanukovych, was forced out of office by mass protests in Kiev.