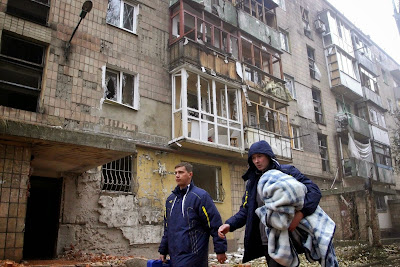 Local people walk past damaged buildings after overnight shelling in Donetsk, Ukraine Friday. A new wave of violence was reported although there is a cease-fire declared in the main separatists city.

He did not provide specific evidence to back up his claims, and since Ukraine does not control long stretches of its border with Russia, it was not immediately clear how the military obtained such specific information.

Ukraine’s military also said Friday that it had killed up to 200 separatist fighters who they said were firing on the army around the Donetsk airport, a scene of some of the most intense fighting in the region.

The military did not provide evidence to prove this claim, either.

Lysenko said five soldiers were killed in the past 24 hours, up slightly from previous days.

A NATO military spokesman said Friday that the alliance was investigating the new Ukrainian reports.

Canadian Foreign Minister John Baird tweeted his concerns Wednesday about reports of “Russia's provocative actions,” calling them “proof that the Kremlin seeks to hamper the peace process in Ukraine.”

A spokesman for Russia’s Defense Ministry criticized Baird and denied NATO’s reports in a briefing in Moscow on Friday, just hours before Lysenko charged that the Russian military was not only approaching but had actually crossed the border into rebel-held regions.

Ukraine and Russia have traded accusations over responsibility for stoking a conflict between government troops and pro-Russian militias in eastern Ukraine that has raged for seven months and claimed more than 4,000 lives.

Those accusations have escalated in the wake of elections in the rebel-held areas of eastern Ukraine last weekend.

Earlier this week, he ordered the deployment of army units to parts of the east and south of the country to prevent a potential offensive.

He also called for scrapping a law granting special status to rebel-held areas of eastern Ukraine.

In a telephone call with German Chancellor Angela Merkel on Friday, Poroshenko did not bring up the topic of a military incursion from Russia, according to his office.

The Kremlin on Friday appeared to soften its rhetoric toward Kiev regarding the election.

Russian President Vladimir Putin’s top foreign policy aide, Yuri Ushakov, said that Russia “respects” the will of voters in the rebel election, rather than using the word “recognition,” apparently because it has weightier legal implications.

Ushakov also refrained from calling the rebel-held territory “Novorossiya,” or New Russia, the separatists’ term for the area, instead calling it the Donetsk and Luhansk region.

He said that although Putin and President Obama have not made specific plans to meet at upcoming summits in Beijing and Australia, “the leaders have a good chance of talking to each other on the go, on their feet.”

The back-and-forth came at the end of a difficult week for Russia’s economy, as the ruble slipped nearly 8 percent against the dollar over concerns about the falling price of oil and Russian companies’ ability to refinance their debts.