November 12, 2014
DONETSK, Ukraine -- The fragile peace in Ukraine is being threatened by an influx of gear and armed men. 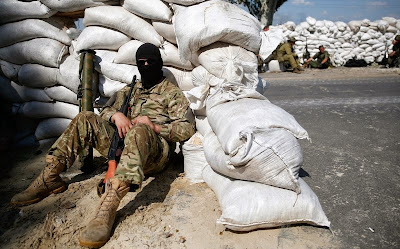 What’s the Kremlin’s next step?

Thousands of Russian troops are on the border -- and thousands more may already be inside Ukraine, if one informed estimate is to be believed.

The steady, and by several accounts heavy, buildup of troops and military equipment along Ukraine’s border with Russia has U.S. officials on alert ahead of a possible new offensive by Russian-backed separatists in the country’s restive east.

“Obviously this represents an escalation. Escalation remains high and is rising,” spokesman Michael Bociurkiw, a spokesman for the Organization for Security and Cooperation in Europe, said in an interview.

The OSCE has observers on the ground in Ukraine, say they have spotted 126 unmarked vehicles heading from an easterly direction into the contested Ukrainian town of Donetsk since Saturday.

On Tuesday, the group witnessed a convoy of 43 unmarked green military trucks with tarpaulin covers moving towards Donetsk.

Five of the trucks were towing 120mm howitzer artillery pieces, and another five were towing partly-covered multi-launch rocket systems, the group said.

That comes on the heels of a report last week of “convoys of heavy weapons and tanks” moving into the city, reportedly belonging to the so-called Donetsk People’s Republic, a Russian-backed separatist group.

The convoy included more than 40 tanks and trucks -- 19 of those were each towing a 122mm howitzer.

And according to an independent assessment provided to The Daily Beast, there are as many as 7,000 Russian troops inside Ukraine now, and between 40,000 and 50,000 amassing on the country’s eastern border.

Phillip Karber, a former Pentagon strategy adviser who has worked closely with the Ukrainian government, said in an interview that he had just returned from Ukraine, where he spoke with commanders at the front.

Karber said that in addition to the thousands of ground troops, as many as 100 tanks are inside Ukraine now, more than 400 armored vehicles, and more than 150 self-propelled artillery and multiple rocket launchers.

Another 350 to 400 tanks are poised along the border, along with more than 1,000 armored vehicles and 800 self-propelled artillery, Karber said.

As many as 7,000 Russian troops are already in Ukraine, by his estimate.

“Clearly something is up. The question is what,” Karber said.

He speculated that Russia could be envisioning a number of scenarios, including pushing further into Eastern Ukraine; attempting to create a land bridge to the Crimea peninsula in order to resupply force there; or making a large land grab further into the country.

Officials with U.S. European Command wouldn't comment on the estimates.

But the NATO commander, Air Force Gen. Philip Breedlove, while not singling out Russian forces by name, told reporters in Italy on Tuesday that he was “concerned about the increased movement" of armored vehicles and other military equipment into eastern Ukraine, and that the flows have been increasing in the past several days.

In September, NATO said that Russia had positioned several thousand combat troops inside Ukraine, along with another 20,000 close to the border.

Breedlove said in October that a significant number of Russian troops had withdrawn, but he didn’t give specific figures.

The head of a Ukrainian human rights group also said in September that an estimated 7,000 to 8,000 troops were based in Ukraine, a figure in line with Karber’s estimate.

If Russian President Vladimir Putin is preparing for a new offensive, he could devastate Ukrainian forces.

“The Russian military is far bigger, far better trained and much better equipped than the Ukrainian military,” said Christopher Harmer, an analyst with the Institute for the Study of War.

“If Putin decided to intervene decisively, the war in Ukraine would be over in 96 hours, weather dependent. But for whatever reason, Putin does not want to do that, so he is posturing a significant Russian military presence to remind the Ukrainian military that there is no chance for tactical victory if state vs. state conflict ensues.”

Breedlove seemed to echo that analysis.

Speaking to reporters, he noted that in advance of much-disputed elections in eastern Ukraine earlier this month, when voters in rebel-led territory picked legislators and ministers in the separatist provinces of Donetsk and Luhansk, Russian roces moved “very close to the border... to signal that the Russians were going to ensure that this election went according to their plans,” Breedlove said.

Both leaders agreed it was “critical” for Russia to live up to its end of the agreement by, among other things, withdrawing “its troops, equipment, and mercenaries from Ukraine,” according to a White House statement.

The large reported troop numbers match up with the level of violence in eastern Ukraine, where the United Nations reports that at least 4,035 people have been killed and 9,336 wounded.

National Security Council spokesperson Bernadette Meehan said on Sunday that the White House is “very concerned about intensified fighting in eastern Ukraine,” as well as reports from the OSCE and elsewhere “that Russian backed and supplied separatists are moving large convoys of heavy weapons and tanks to the front lines of the conflict.”

Meehan called on all sides in the conflict to abide by a cease-fire hammered out in September, and warned that any attempts by separatists to seize more territory in eastern Ukraine “would be a blatant violation” of the agreement.

Ukrainian Government should review the suitability of such advice and act in a timely manner.
11:53 AM

Mr. Frank-Walter Steinmeier you should of raise your voice a few days ago when large columns of military vehicles, artillery and heavy equipment was crossing into Ukraine from Russian territory.

As a response, Ukraine must prepare its military to an adequate level, and be able to stand up to future provocations from separatists.
Good job Mr. Stepan Poltorak.
11:30 PM