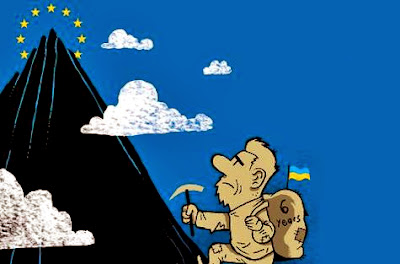 If the West keeps frowning snobbishly as Ukraine stumbles and sometimes backslides, Putin will ultimately have his way.

Some of his fellow East Europeans who are already members of both organisations will actively encourage that ambition, while leaders of NATO and EU will do their best to rain on Poroshenko’s parade.

I think the East European attitude has rather more merit.

At first glance, six years is an awfully short time for Ukraine to prepare for membership in the European clubs for nation states.

For months, Ukraine’s fiercest advocates have been calling for radical deregulation, to little effect.

Last week, Anders Aslund of the Peterson Institute for International Economics, who has long rooted for a European Ukraine, thus described the recent coalition agreement of Ukraine’s pro-EU parties that together have a majority in the new parliament:

The draft coalition agreement even reminded me of reading Leonid Brezhnev’s speech at the 26th Party Congress of the Communist Party of the Soviet Union in 1981.

This is not a reform programme, but an old-style bureaucratic Soviet document for the preservation of the old system.

Such a conservative document will never bring reform.

There is no declaration of will or strategy.ation of the old system.

Militarily, Ukraine is a mess, too.

In June, Poroshenko vowed to end the conflict in eastern Ukraine within a week.

In August, the Ukrainian army and ragtag volunteer battalions were trounced by a small contingent of Russian airborne troops, forcing Kiev to accept a humiliating and shaky ceasefire with the pro-Russia rebels.

The EU needs Ukraine as much as it needs another Greece, and NATO might as well admit Georgia, with a similar history of fighting Russia.

And Poroshenko’s insistence that he has a six-year plan to meet EU and NATO membership requirements sounds improbable.

Yet, miracles happen, and Ukraine certainly is due for one after missing every chance in 23 years of independence.

The leaders of some post-Soviet countries, having already won membership, clearly feel it would be wrong to dampen Poroshenko’s enthusiasm to give it a try.

If he does not, Ukraine will remain stuck in limbo between Europe and Russia.

“You need to work, you have to do a lot of homework, it’s not an easy process. Why should you? Because any country that makes the effort and carries out reforms will meet the criteria to be a NATO member.”

Grybauskaite, however, is an outlier within the EU.

She recently called Russia a “terrorist state”, to which Moscow replied with an undeclared customs blockade of Lithuania.

Core EU and Nato members are wary of such radical confrontation, which is why they do not particularly want Ukraine to lay a miracle on their doorstep and force them to cope with it.

He added: “It makes little sense today to speculate on Ukrainian membership in the EU in the distant future.”

What, however, if Grybauskaite and those who agree with her in Poland, Latvia and Estonia are right?

Sally Painter, a veteran US foreign policy consultant, argued in a recent article that the West should not be too strict when dealing with aspiring alliance members from the Russian sphere of influence.

So what if reforms under the likes of ousted Ukrainian President Viktor Yanukovych or former Georgian President Mikheil Saakashvili were incomplete?

The West should have valued their intentions and welcomed their countries to its exclusive clubs:

When it comes to needed reforms, western leaders have too often insisted on the perfect to the detriment of the good, weakening the leaders they should support in the process.

To prevent the further unravelling of pro-Europe forces, policy makers must support the progress that has already been made — and the local leaders who are driving it.

While I think accepting demagoguery in place of true economic and political reforms would be transparently hypocritical and unfair to countries that have made a genuine effort to tear themselves from their Communist past, Painter has a point.

If the West keeps telling Ukraine that its efforts are futile, if it keeps frowning snobbishly as Ukraine stumbles and sometimes backslides, Russian President Vladimir Putin will ultimately have his way, and see the country forget its European aspirations.

Who knows, it might have had more will to reform itself — as Germany did after Second World War — had the West provided a version of the Marshall Plan instead of looking on with wary scepticism.

Perhaps that error can be rectified with Ukraine, turning it into an example for Russians who now see no alternative to Putin.

It would be a risky strategy, but the only morally acceptable one if western leaders truly reject Putin appeasement, as they say they do.

Adopting this strategy will mean studying and correcting Poroshenko’s accession plans, as well as providing plentiful but strictly-controlled aid for the transition.

It would also mean publicly voicing support for Ukraine’s aspirations rather than pouring cold water on them.