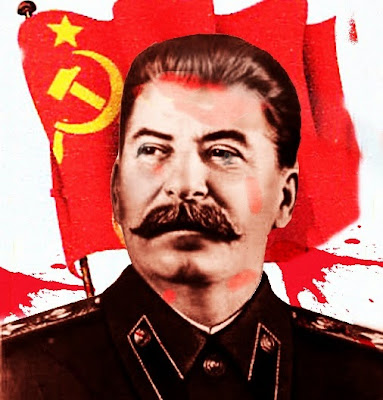 Joseph Stalin, the 'butcher' of Ukraine.

On Saturday, Ukraine’s president, Petro O. Poroshenko, accompanied by other officials and by his wife, laid a jar of seeds of grain near the Dnieper River in Kiev to mark the anniversary.

Stalin’s rule is rightly associated with two of the most horrific episodes in Ukraine’s history: the famine and the 1937-38 mass executions of Ukrainian intellectuals and political figures, both of which took place across the Soviet Union.

Both tragedies have been invoked regularly in the months since Russia’s president, Vladimir V. Putin, seized Crimea and sent forces into eastern Ukraine.

But there is an underappreciated aspect to this tangled history: Stalin’s rule saw the formation of a land with strong Ukrainian national consciousness.

Yes, he was a murderous tyrant, but he was also an architect of today’s Ukraine.

Ukraine emerged out of czarist Russia as a separate country as a result of World War I, the revolutions of 1917, German military occupation and the efforts of Ukrainian nationalists.

Against the wishes of other early Soviet officials, who wanted to suppress nationalism, Stalin strongly advocated recognizing — and using — it.

“Clearly, the Ukrainian nation exists and the development of its culture is a duty of Communists,” Stalin told the 10th Party Congress in March 1921.

“One cannot go against history.”

Stalin knew from his Georgian homeland that national sentiment was too strong to suppress.

He also knew that the Communists could use it to win loyalty and achieve economic modernization.

Ukraine had remained effectively independent even after being reconquered by the Bolsheviks in the Russian Civil War of 1918-1921 and rechristened the Soviet Socialist Republic of Ukraine.

Ukraine had a diplomatic office in Moscow, too.

At the 10th Party Congress, Stalin argued for an integrated Soviet state.

But the form of that integrated state would carry fateful consequences.

In 1922, Stalin proposed folding Ukraine, Byelorussia and the Caucasus into Soviet Russia (formally known as the Russian Soviet Federated Socialist Republic) while allowing them to retain substantial autonomy, a proposal that initially elicited Lenin’s support.

But Lenin soon changed his mind, and demanded a Union of Soviet Socialist Republics, in which Ukraine and Russia would hold ostensibly equal status.

Lenin’s counterproposal was based not on a commitment to self-rule but, like Stalin, on tactics.

He argued that as other countries underwent socialist revolutions — a Soviet Germany, a Soviet Hungary, a Soviet Finland — they, too, could join the new Soviet Union.

Stalin was not so naïve.

“These peoples would scarcely agree to enter straight into a federative bond with Soviet Russia” on the Ukrainian model, he told Lenin.

Stalin bowed to Lenin’s authority, and loyally and skillfully implemented the Bolshevik leader’s vision to form the Soviet Union in late 1922.

Lenin’s vision amounted to an overconfident bet on world revolution.

Stalin also believed in world revolution, but his proposal — annexation into Russia — would have been a hedge on that bet.

In 1991, of course, the Soviet Union dissolved.

Ukraine, having avoided absorption into Russia thanks to Lenin, became independent.

But the new nation encompassed as much land as it did thanks to Stalin.

When it was first formed, Soviet Ukraine had no natural border in the east with Soviet Russia.

The demarcation disappointed all sides — and it is the site of today’s separatist rebellion.

In the west, as a result of his 1939 pact with Hitler, Stalin seized eastern Poland and joined it to Ukraine.

The city today known as Lviv was then a largely Polish- and Yiddish-speaking community, surrounded by a Ukrainian-speaking countryside.

Under Stalin and his successors the city would become predominantly Ukrainian-speaking — and the center of western Ukrainian nationalism.

With the defeat of Nazi Germany in 1945, Stalin annexed Transcarpathia, formerly part of Czechoslovakia, and now the southwest corner of Ukraine.

Finally, Crimea, at the time a predominantly ethnic Russian territory, was transferred to Ukraine from Russia in a decision taken under Stalin but implemented only after he had died, in 1954, on the 300th anniversary of the Cossack request for imperial Russia’s protection against the Polish-Lithuanian commonwealth.

Except for Crimea, today’s nationalist Ukraine is a bequeathal of Stalin.

It’s true that he executed countless officials of Ukrainian (and every other) ethnicity.

But as the Soviet state expanded, he promoted still more Ukrainians to take their places.

Even when he belatedly made study of Russian language a requirement in all Soviet schools, he did not discontinue instruction in national vernacular languages.

Of course, in helping to enlarge and consolidate Soviet Ukraine, Stalin never imagined that the Soviet Union would someday disappear.

And so Putin faces a formidable obstacle.

He is said by diplomats to have told President George W. Bush, at a NATO summit meeting in Bucharest, Romania, in 2008 that “Ukraine is not even a state.”

And in claiming territory from Ukraine, Putin has cited Catherine the Great’s Black Sea conquests and creation of “New Russia” in the late 18th century.

One does not have to take sides over the human tragedy unfolding in eastern Ukraine to grasp that, whether Putin does or does not have clear strategic goals, he cannot wipe out the fruits of the Soviet period.

And unlike Stalin — indeed, because of Stalin, and because of his regime’s own behavior — Putin cannot entice Ukraine back into a new “Eurasian” union with Russia either.

Ukrainians have little affection for Stalin’s dictatorship, but their struggle for statehood owes much to his legacy — a legacy that, for different reasons, neither they nor Putin like to think about.