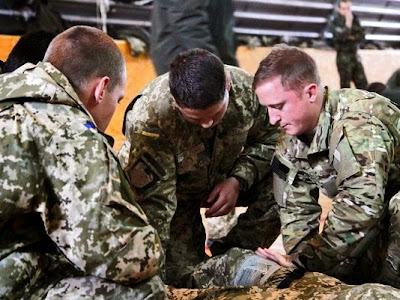 The announcement comes the same day the White House released a statement honoring the memory of millions of Ukrainians starved to death during the "Holodomor," between 1932 and 1933 under Stalin's regime.

The SOCEUR team from Stuttgart, Germany, deployed to support nearly 600 Ministry of Defence personnel and in response to Ukrainian government requests, according to a statement from U.S. European Command spokesman Navy Capt. Greg Hicks.

"This initial mission will take no more than 30 days but we are prepared to stay longer if directed based on the need for additional courses as identified by the Ukrainian Government/Military," EUCOM spokesman Lt. Col. David Westover told Military Times.

"This is another example of the U.S. Government supporting the Ukrainian Government and our partners in the region as a part of Operation Atlantic Resolve," he said in an email.

SOCEUR members are also working with the nongovernment organization Patriot Defense, which has conducted similar coaching for Ukrainian military forces since May.

On Thursday, the United Nations said that the death rate in Ukraine has climbed in the past eight weeks despite a ceasefire called in September, according to a report from Reuters. More than 4,400 fighters and civilians have died since pro-Russian rebels began taking control of border areas in early April.