November 24, 2014
KIEV, Ukraine -- A stone’s throw from this weekend’s candlelight vigils in Kiev marking a year since the start of the demonstrations that toppled Viktor Yanukovich as president, a different kind of Ukrainian was out on the street: the black market currency traders. 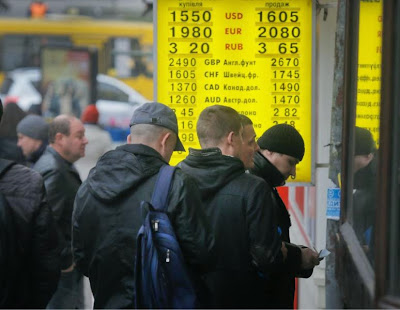 “Selling dollars? I’ll give you more, I’ll give you 18,” said one man outside a foreign exchange booth offering 15.50 Ukrainian hryvnia to the US currency.

The re-emergence of shadow traders last seen after the Soviet Union collapsed is a sign that – a year after the Kiev protests in which 100 people died in the hope of securing a prosperous, European future – the war-torn country is sliding once again into a financial crisis.

The hryvnia has plunged 50 per cent in value this year; international reserves are at barely six weeks of import cover, half the level seen as a prudent minimum; economic output is set to contract by at least 7 per cent this year.

That toxic mix has fuelled fears of a possible sovereign default, pushing yields on Ukraine’s international bonds to an all-time high, and bringing calls for a new international bailout.

A meltdown was averted in May by an agreement on $17bn IMF support, plus $10bn from other donors.

But that deal, and the assumptions behind it, was agreed before Russian-backed separatists stoked a war in Ukraine’s industrial east that has cost 4,000 lives.

With production crashing at eastern coalmines and steel mills, a double-digit contraction of exports has triggered a shortage of hard currency, and squeezed bank lending.

A renewed Russian military build-up in the east and signs that a two-month-old ceasefire may be unravelling, plus delays in forming a governing coalition since parliamentary elections on October 26, have further hit investor confidence.

Anders Aslund, a top western expert on Ukraine’s economy, warned starkly last week that the country was in a “vicious financial crisis”.

“Threatened constantly by Russian military aggression, the country faces a financial meltdown within the next four months,” he wrote in a blog urging Ukraine’s leaders to “wake up!”.

Some relief came on Friday when five pro-western parties signed a coalition agreement.

That gave Ukraine for the first time a two-thirds majority of pro-western parties in parliament – enough to make changes to the constitution – in favour of deeper European integration.

Meeting journalists shortly before the agreement was signed, prime minister Arseny Yatseniuk insisted rumours of rivalry between him and president Petro Poroshenko were false.

“I want to send you a very strong signal of unity between the president and prime minister,” he said.

Mr Yatseniuk admitted the economy was “heavily affected by the war”, but said the government had collected 5 per cent higher revenues than in 2013, despite industrial output falling 9.4 per cent.

Mr Yatseniuk said the new government – expected to be unveiled this week – was committed to accelerating long-overdue reforms to curb corruption and modernise the economy.

However, time is short.

Ukraine has received $8.2bn in financing this year from the IMF and other donors.

But Oleksandr Shlapak, finance minister, said last week that the country was unlikely to get any more IMF money before the year-end because the delay in forming the government had pushed back passing a 2015 budget.

Ukraine must pay off $3.1bn arrears to Russia for natural gas to end a current cut-off of the vital fuel by Moscow – and pay in advance for future Russian supplies.

Olena Bilan, chief economist at Dragon Capital, a Kiev investment bank, warns that international reserves, which dropped to $12.6bn in October, could hit single figures by the year-end.

The uncertainty has piled pressure on the currency, in turn stoking inflation – now 19 per cent – and putting strain on banks.

In a sign of potential systemic banking problems, the central bank on Friday announced it had put two large banks, VAB and CityCommerce, under receivership.

One banking insider warned that this could lead to a “domino effect” of more banks being declared insolvent.

Yet analysts say swift, and relatively limited, action by international lenders could stabilise the situation.

Ms Bilan estimates Ukraine’s external financing needs for next year at about $12bn, though that assumes large-scale eastern fighting does not resume, and some estimates are higher.

She suggests even a slightly smaller bailout could suffice, improving sentiment sufficiently for private investors to re-enter the market and staunching capital outflows.

Even after the $27bn already pledged, that would be dwarfed by the hundreds of billions the EU and international lenders pumped into countries such as Greece.

“For western countries it is much easier to support Ukraine now than to deal with the potential negative consequences and spillover effects of a potential financial meltdown in Ukraine on other countries, and on global sentiment,” Ms Bilan said.