November 05, 2014
BRUSSELS, Belgium -- Russia has moved troops closer to the border with Ukraine and continues to support rebels in the country's east, NATO's chief said on Tuesday, after an election held by the pro-Russian separatists and condemned by Kiev and Western leaders. 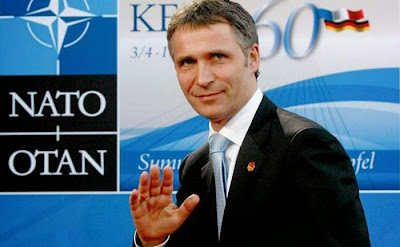 Ukraine's president said Sunday's vote flouted terms of a plan to end a war that has killed more than 4,000 people, and that newly formed army units would be sent to defend a string of eastern cities against a possible new rebel offensive.

"Russia continues to support separatists by training them, by providing equipment and support them by also having Russian special forces inside eastern parts of Ukraine."

Russia has denied military involvement in eastern Ukraine despite what Western officials have cited as overwhelming evidence to the contrary.

"We call on Russia to make genuine efforts towards a peaceful solution," Stoltenberg said, "and to use all their influence on the separatists to make them respect the Minsk agreements and to respect the ceasefire which is a precondition for a political solution to the difficult situation in Ukraine."

The numbers of intercepts have so far this year been over 100, which is about three times as much as the total number of intercepts the whole of last year," he said.

The pro-Russian separatists staged swearing in ceremonies for their leaders in eastern Ukraine on Tuesday.

Moscow says the election of Alexander Zakharchenko and Igor Plotnitsky as leaders of the Donetsk and Luhansk "people's republics", which jointly call themselves "new Russia", means that Kiev should now negotiate with them directly.

EU TO MULL CHANGES TO SANCTIONS

Kiev has rejected this, describing the rebels as Russian-backed "terrorists" or "bandits", with no legitimacy.

Mogherini said the EU would assess whether to strengthen or ease sanctions imposed on Russia over its role in Ukraine depending on the situation on the ground.

"This is a process that is going to go on in the coming weeks," she said, when asked if Russia's response to Sunday's rebel ballot could trigger stiffer sanctions against Moscow.

The situation in Ukraine will be addressed at the next EU foreign ministers' meeting on Nov. 17, she said.

"...I would say the main topic of discussion today should be ... how do we make sure that we find a solution to the conflict?" the former Italian foreign minister said.

Mogherini said the "so-called elections" in eastern Ukraine were illegal and illegitimate and would not be recognized by the EU.

There was a risk they could end chances for rebel dialogue with Kiev and dialogue between Kiev and Moscow, she said.

The EU has gradually tightened sanctions against Russia in response to its annexation of Ukraine's Crimea region in March, after the overthrow of Kiev's pro-Russian president by protesters, and its support for the rebel cause.