Russian Tanks In Ukraine, But US Won’t Say ‘Invasion’

November 14, 2014
MOSCOW, Russia -- Thousands of Russian troops have crossed into eastern Ukraine in recent days, along with columns of tanks, artillery and air-defense systems, according to NATO’s top commander. 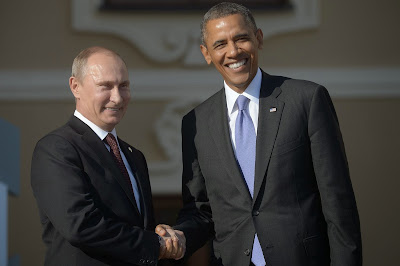 Obama will not use the word 'invasion' so as not to offend his friend Putin.

By nearly every definition – indeed, according to the Oxford dictionary – the act of armed forces crossing the border would constitute an invasion.

But the Obama administration has noticeably avoided using the word to describe Russia’s apparent action (Russia denies any of its troops or military equipment are in Ukraine).

“Russia is instead surging more forces and more equipment across the border,” Samantha Power, the U.S. Ambassador to the United Nations, said Wednesday.

State Department spokeswoman Jen Psaki referred to heavy weapons being “moved to the front lines” and endorsed “the developments seen by NATO.”

Asked point blank by email whether Russia had invaded Ukraine, Psaki again declined to use the term.

“As we’ve said consistently, Russia is blatantly violating the sovereignty and territorial integrity of Ukraine,” she told ABC News.

“No matter what you call it, Russian action inside Ukraine must end immediately.”

Psaki offered no explanation for why the term “invasion” was not being used, but the blatant effort to deflect it suggests a policy decision was made within the administration.

John Herbst, director of the Eurasia Center at the Atlantic Council and a former U.S. Ambassador to Ukraine, says it is “obvious” the Obama administration is trying to downplay the significance of Russia’s military aggression to avoid an equally forceful response.

“If they say invasion, they’re afraid it will pressure them to take the strong actions that they are reluctant to take,” he said.

“It would make people ask ‘Well, why isn’t our response stronger?’ And that’s a very good question.”

This isn’t the first time.

In late August, when Ukrainian troops were close to defeating the Russia-backed rebels, NATO said it saw Russian troops crossing into Ukraine to bolster the rebel forces.

Administration officials declined to call it an “invasion” then, too.

When confronted with his avoidance of the “I” word, he again dodged the question.

“Russia determined that it had to be a little more overt in what it had already been doing, but it’s not really a shift,” he said.

Some terms carry legal weight, meaning their use could trigger required action by the United States.

Calling an act “genocide,” for example, triggers a certain response by law.

Not long ago, the Obama administration made a conscientious decision to start talking about Russia’s “occupation” of the Crimean peninsula, which was annexed from Ukraine in March.

The United States does not recognize Crimea as part of Russia, but using the term “occupation” recognizes not just a de facto governance over the region, but also that Russia has a legal responsibility for what happens there.

The term “invasion” can also trigger a certain response, like in the case of NATO where treaty allies are bound to defend each other in such a situation.

No such treaty obligation exists, however, between the United States and Ukraine.

“I am unaware of any legal reason why they are not using the word invasion,” Herbst of the Atlantic Council said.

How invasion of Ukraine by Russia is different from invasion of Kuwait by Saddam Husein?
3:14 PM