November 01, 2014
DONETSK, Ukraine -- A Russian action film star is in hot water after he was caught on film wearing press gear while firing a machine gun toward Ukrainian lines with Moscow-backed rebels at Donetsk airport. 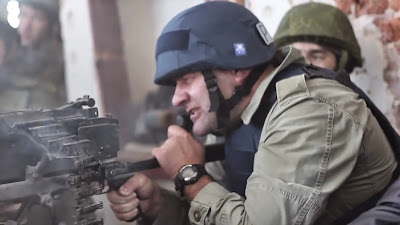 In the video released by the rebels’ NovorossiaTV on Oct. 30, the barrel-chested Mikhail Porechenkov is heard saying, “ceasefire,” before opens fire with a mounted machine gun at the airport, grinning widely.

Afterward, he poses for a photograph with the fighters, wearing a blue helmet and vest marked with “PRESS.”

“For the fighters at combat positions at the airport, this visit was a big surprise and definitely an enjoyable event,” reads the Russian text in the video’s description.

Ukraine’s state security service, however, was much less enthused.

It said it had opened criminal proceedings against Porechenkov for "participation in terrorist activities of the so-called DNR," referring to the self-proclaimed breakaway territory known as the "Donetsk People’s Republic."

And the minister went further, saying he would appeal to Interpol over the matter.

"Investigators believe that with such obvious evidence of a crime… Interpol will actively support tracking him down, and Porechenkov could not navigate the world outside Russia without being arrested and extradited to Ukraine," Avakov said.

The Moscow Union of Journalists and a popular Moscow radio station also criticized the actor on Friday.

"I, as the chairman of the Union of Journalists of Moscow, believe this is sad and a shame, when in one moment what we fought for years to protect journalists is destroyed," Pavel Gusev said in his statement.

Porechenkov’s visit to war-torn Donetsk is merely the latest by a high-profile Russian star.

Soviet crooner Iosef Kobzan, known as Russia’s Frank Sinatra, performed for a crowd of elderly women at a Donetsk theater on Monday.

Both the stars crossed illegally into Ukraine through border checkpoints controlled by the rebels.

Kiev has denounced their visits.

Fighting began at the Donetsk Airport in late May after pro-Russian rebels stormed the buildings.

But Ukrainian forces beat them back with heavy artillery in one of the fiercest battles of the seven-month conflict.

More than 50 rebels, including at least 33 Russian citizens, were killed in that fight.

Skirmishes at the airport resumed in late September, despite a cease-fire agreement reached in early September after peace talks in Minsk.

Since then, the rebels have captured and now control much of the airport’s grounds and terminals.

But stubborn Ukrainian fighters, referred to as “cyborgs” for their superhuman-seeming abilities to hold on to their portion of the airfield despite round-the-clock bombardments of machine gun and rocket fire, have not retreated from the airport.