November 03, 2014
DONETSK, Ukraine -- Russia has called on Ukraine to halt its military offensive against pro-Moscow rebels in the east, saying the insurgent leaders have enough authority to hold talks with Kiev after elections in parts of the country under their control. 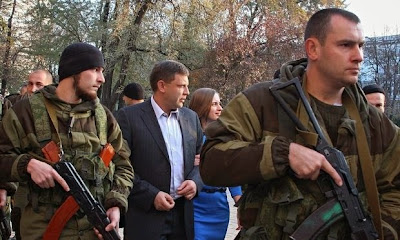 Alexander Zakharchenko (C), the rebel leader in Donetsk, has claimed an easy victory in one of Ukraine’s separatist elections.

The deputy foreign minister, Grigory Karasin, made the appeal after Moscow recognised separatist elections in two eastern Ukraine regions dismissed as illegal by Kiev and the west.

The hastily arranged polls were boycotted by mainstream international observers and only a handful of marginal rightwing politicians from Europe claimed to be monitoring the vote.

The head of the separatists in Luhansk region, Igor Plotnitsky, won by a similarly large margin.

“The elected representatives of Donetsk and Luhansk regions obtained a mandate to hold negotiations with central Ukrainian authorities to solve problems … via a political dialogue,” Karasin said.

But an angry European response, likely to be echoed in Washington, raises the temperature in the west’s dispute with Russia over its support for the separatists.

A spokesman for the German chancellor, Angela Merkel, ruled out any premature lifting of EU economic sanctions against Russia.

He said Berlin found it incomprehensible that “official Russian voices” should recognise an election held by pro-Russia separatists in east Ukraine and further sanctions might be necessary if the situation worsened.

In the runup to the vote, rebels carried out heavy shelling of government positions across the conflict zone.

The UN says more than 4,000 people have died since fighting started in April.

“It is all the more incomprehensible that there are official Russian voices that are respecting or even recognising these so-called elections,” said the spokesman, Steffen Seibert.

The German foreign minister, Frank-Walter Steinmeier, earlier called on Russia to respect “the unity of Ukraine”.

Steinmeier said the elections had “gone against the letter and the spirit of the Minsk agreement”.

The emboldened rebel leadership in the two separatist enclaves appeared in little mood for compromise after their victories were confirmed.

The head of the rebel election body in Donetsk, Roman Lyagin, said:

“Kiev has to come to terms with the idea that Donbass is not part of Ukraine. Whether they will recognise the result of our vote or not is Kiev’s problem.”

Russia appeared to hint in a foreign ministry statement that it would stop short of supporting outright independence for the Donbass, as Ukraine’s heavily industrial eastern regions are known collectively.

“In view of the elections, it is extremely important to take active steps toward promoting sustained dialogue between central Ukrainian authorities and the representatives of the Donbass,” it said.

Unknown said…
Chances are for Russia to use its force again, on Ukrainian soil in case ATO is re-activated is below average, and full scale confrontation with EU and US are also not in Russia's interest.

Unfortunate Russia already armed the separatists quiet heavily, and it will be not as easy as it could off being in August to take control of Ukrainian territory under separatists control. It is also very unfortunate that more innocent people made die due the fact that separatists ignored Minsk Agreement and forced the elections. Local people who are remained on separatist territory should find the way and move out to see their relatives or friends or simply get out of the way until spring time or so. Now is a good time to do so.
7:43 PM