November 01, 2014
MOSCOW, Russia -- Russia will resume shipping natural gas to Ukraine after Kiev pays off its first debt installment for past supplies of gas next week, officials said Friday. 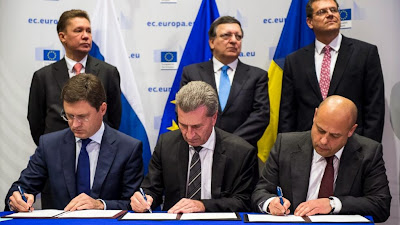 Alexei Miller, chief of Russia's state-controlled Gazprom natural gas giant, made the statement hours after Russia, Ukraine and the European Union thrashed out a $4.6 billion deal that will guarantee Russian gas supplies to Ukraine and further on to the EU.

The deal eased fears that Europe will end up shivering this winter like it did in 2009, when a spat over Ukraine's gas bill prompted Russia to cut off energy supplies to Europe for nearly two weeks.

The leaders of Germany, France, Russia and Ukraine hailed the deal in a conference call Friday as an "important step toward ensuring uninterrupted gas transit to Europe," the Kremlin said.

Moscow had cut off gas supplies to Ukraine in June over unpaid debts, a move that followed the ouster of Ukraine's Russia-friendly leader and the Kremlin's annexation of Crimea in March.

Talks dragged on for five months amid fighting in eastern Ukraine between pro-Russian insurgents and government troops.

But the looming onset of winter — a fierce, freezing season in Ukraine — had given the talks increasing urgency.

Miller said Friday that Gazprom expects to receive the first Ukrainian tranche of $1.45 billion before the end of next week and will start gas supplies to Ukraine within 48 hours after getting the money.

Under the deal, Ukraine has pledged to pay the rest of its $3.1 billion gas debt before the year's end and also to pay in advance for Russian gas supplies through March.

Ukraine will pay $378 per 1,000 cubic meters of Russian gas until the year's end, and the price is expected to fall slightly in the first quarter of next year.

He called the agreement sealed in Brussels "provisional."

"We sorted out a number of issues, including the price, but only for this temporary deal," Klimkin said.

"It should provide enough safety and security for gas supplies this winter."

Klimkin said Ukraine will pay in advance on a monthly basis for the gas it buys — a flexible arrangement that also allows Ukraine to purchase additional gas if needed.

Russia claims Ukraine owes it $5.3 billion for past supplies, while Ukraine only acknowledges a debt of $3.1 billion.

The difference is based on a discounted price Moscow offered to Ukraine under the previous president but annulled after his ouster.

An EU-brokered compromise means gas supplies will resume on condition that Ukraine pays the amount of debt it accepts.

The debt will be determined through arbitration.

The EU said it had been working closely with international institutions to help foot the gas bill, since Ukraine's economy is in dire straits.

She made it clear, however, that the EU had given no pledge to step in and pay if the Kiev government can't or won't.

"The EU is not paying fresh money or additional money to help Ukraine pay its gas bills," said Holzner.

"And the EU is not giving any guarantee to the Russian side in case Ukraine says we cannot order X amount of gas or we cannot pay."

Holzner said Ukraine could also use part of a $1.4 billion aid package from the IMF, gas transit fees paid by Russia and Ukrainian state gas company Naftogaz's own funds to pay for gas supplies.