November 10, 2014
DONETSK, Ukraine -- Ukraine warned that tensions were rising in the conflict-torn east, saying Russia was boosting its presence with additional supplies to rebels days after 200 separatist fighters were killed. 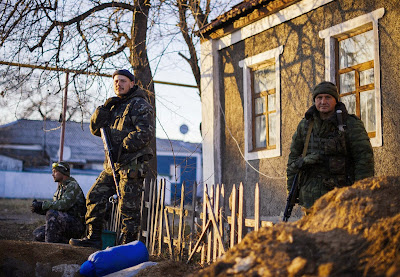 Pro-Russian separatists stand guard at a check point near the village of Frunze, eastern Ukraine on Nov. 4, 2014. Insurgents fired on Ukrainian positions 33 times yesterday, killing one civilian and two policemen, the Defense Ministry said in a post on Facebook.

Donetsk faced heavy shelling overnight that damaged or destroyed seven buildings in the pro-Russian stronghold, the city council said on its website.

Three government troops were killed in the past 24 hours and 13 were wounded, according to Ukrainian military spokesman Andriy Lysenko.

There’s a “high probability” Russia is preparing major provocations such as terrorist attacks or shelling that it can blame on Ukraine as a pretext to send “so-called peacekeepers” into rebel-held areas, he said.

The violence further undermines a Sept. 5 truce that had reduced civilian casualties.

Ukraine said Nov. 7 that its forces killed as many as 200 insurgents in a battle for Donetsk Airport, prompting Russia to send new tanks and military vehicles across the border into rebel areas.

The Organization for Security and Co-operation in Europe said in a statement yesterday that convoys of unmarked trucks and tanks were seen in the city of Donetsk and nearby Makeevka.

The column was moving for “tactical reasons,” he was cited as saying.

More than 40 trucks were seen on the eastern outskirts of Makeevka by OSCE’s Special Monitoring Mission to Ukraine, some towing howitzers and carrying personnel in dark green uniforms without insignias, according to the statement.

The mission also observed a convoy of nine unmarked T-72 and T-64 Russian tanks outside the city of Donetsk.

Russian Foreign Minister Sergei Lavrov refused to comment on whether his government sent troops and tanks into Ukraine at a press conference yesterday with U.S. Secretary of State John Kerry in Beijing.

The conflict is moving toward the same kind of open warfare that broke out after the February ouster of Russian-backed President Viktor Yanukovych and Vladimir Putin’s annexation of the Crimean peninsula from Ukraine a month later.

At least 4,035 people have been killed and 9,336 wounded in eastern Ukraine in the fighting, according to the United Nations.

Animosity between the government in Kiev and pro-Russian rebels in Donetsk and Luhansk rose last week after the separatists held Nov. 2 elections condemned by the U.S. and European Union as illegitimate and a violation of the cease-fire.

Ukraine has blamed Russia for inciting the conflict by delivering cash, weapons and fighters to the region.

“The separatists and their Russian supporters are renewing the conflict after pausing for elections,” Joerg Forbrig, senior program officer at the German Marshall Fund of the U.S. in Berlin, said by phone.

“The war’s intensity is flaring up because Putin finds it hard to stop the aggression given economic deprivations and nationalist expectations at home.”

Both sides have accused each other of breaking the truce agreed in Minsk, Belarus, with the Ukrainian government saying it’s suffered more than 100 killed and about 600 wounded since the cease-fire came into force.

The artillery strikes at the Donetsk airport on Nov. 7 were a response to rebel shelling with surface-to-surface Grad missiles, mortars and howitzers that killed five soldiers and wounded 16, according to Lysenko.

In August, according to NATO and Ukraine, Russian forces helped rebels in the Donetsk and Luhansk regions wage a counteroffensive to break out after they were encircled by Ukraine’s army.

NATO fighter jets intercepted a Russian military aircraft over the Baltic Sea, the latest in a series of similar incidents that have grown in frequency.

Ukraine’s military said Russia’s air force had put some of its units on high alert.

A spokesman for Russia’s armed forces said by phone yesterday that he wasn’t able to comment.