November 05, 2014
WASHINGTON, DC -- While Russian combat aircraft grab the headlines by buzzing NATO airspace as far west as Portugal, Russian supply trucks are quietly redrawing the map back in Ukraine. 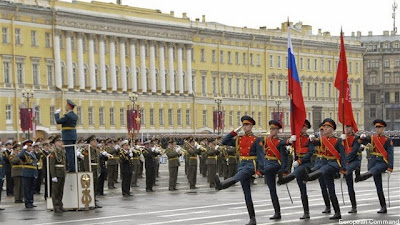 Vladimir Putin swallowed the Crimea whole in a single gulp, but it looks like he’s digesting eastern Ukraine by a kind of military-political osmosis.

That geopolitical replay of The Blob makes Gen. Philip Breedlove distinctly nervous about planned cuts to US forces in Europe.

“You’ve seen a series of truck convoys going in and out of eastern Ukraine, none of those approved by the Ukrainian government,” said Gen. Breedlove, commander of both US and NATO forces in Europe, during a Pentagon press briefing this morning.

“The Ukraine-Russia border is wide open in these places [and] Russian equipment, resupply, training flows back and forth freely.”

About 250 to 300 Russian advisors are currently on Ukrainian territory, he said.

That’s a far cry from the 4,000 troops in some reports, a figure Breedlove dismissed, but it’s still a critical source of technical expertise (and probably political direction) for the ragged separatists.

Meanwhile, despite what Breedlove likes to call “a ceasefire in name only” between the separatists and Ukrainian government forces, continuing clashes have turned the frontline between Kiev and rebels into something more and more like a border between two states.

“We have seen a general trend towards a hardening of this line of demarcation and much more softening of the actual Ukraine-Russia border,” Breedlove said.

Over time, he said, “what has changed is the line of demarcation has become…more defined, and the Ukraine-Russian border behind it has become completely porous.”

If these facts on the ground are the geostrategic meat, then the the recent elections are the symbolic sprig of parsley on top.

Instead of participating in the vote organized by Kiev, the separatists conducted their own elections on Sunday.

“We really haven’t had enough time to see what impact they have had,” Breedlove said today, “[but] we don’t recognize them, we don’t support them, we don’t think they’re helpful.”

“Helpful,” of course, is the last thing Putin’s Russia wants to be. The number of battalion-sized “task groups” on the Russian side of the rapidly eroding border has held steady at seven, Breedlove said, down from a peak of 18.

He declined to estimate precise numbers of troops.

Some of them recently broke camp and moved westwards, while still staying on Russian territory.

Breedlove believes this was simply a show of force to ensure that “the elections went according to separatist plans,” and he will watch closely to see if they move back.

Compared to these actions on the ground in eastern Europe, Russia’s provocations in the air seem almost diplomatic.

“The Russians do routinely conduct these flights,” he said, “[and] we do not routinely talk about them” with Moscow.

There are “mechanisms” in place if the Russian pilots maneuver “dangerously close” to NATO aircraft or otherwise behave in an “unprofessional” manner, he said, as the Chinese are wont to do off Hainan Island, but last week’s flights respected both international boundaries – unlike an earlier flight that clipped Estonian airspace – and safety rules.

“There has been a general increase in the number of these kinds of incursions,” Breedlove said.

What was different about last week’s was the sheer scale, both in terms of distance – two Russian Tu-95 Bear bombers got so far west that it fell to the Portuguese Air Force to intercept them – and in terms of the number of aircraft involved.

“Historically,” Breedlove said, such Russian probes have been conducted by one or two aircraft, but the largest of last week’s provocations involved eight planes over the North Sea – four Tu-95 bombers and four Il-78 tankers to boost their range – and seven aircraft over the Baltic – a mix of Mig-31, Su-34, Su-27, and Su-24 fighters.

By contrast, Breedlove said, “I have not seen more provocative actions at sea in the last few days” – though he declined to comment on the underwater goose chase that recently embarrassed the armed forces of neutral Sweden.

Earlier in the Ukraine crisis, however, Russian naval forces upped their activity not only in the Black Sea and Baltics but even in the Pacific.

Overall, he said, “their reactions are uniform… in the air and at sea.”

"They've very busy in the undersea domain [i.e. with submarines]; they’re not as busy on the surface,” he said at the Brookings Institution."

By contrast, Greenert continued, “they’re pretty active up in the air.

Their long range flights and reconnaissance [are] probably more active than they’ve been in a decade,” including probing the US air defense identification zone (ADIZ) around Alaska.

That said, he emphasized, echoing Breedlove, “they acted professionally in all regards.”

So what does all this activity mean?

“My opinion is that they’re messaging us,” Breedlove said.

“They’re messaging us that they are a great power and that they have the ability to exert these kinds of influences.”

So what signals is the US sending?

“You’ve heard me say at this podium [before] that my first budgetary concern is that we take no further troop reductions in Europe, and if nothing changes, there are still reductions planned for Europe,” Breedlove said.

He can afford to close bases, but not withdraw forces.

“We have infrastructure that can be divested, but not force structure.”

For forces permanently based in Europe, “we have it right,” said Breedlove, “[but] because of the increased pressure that we feel in eastern Europe right now and because of the assurance measures that we are taking [e.g. in the Baltics] we require additional rotational presence.”

That means deploying units from the US to eastern Europe on a regular basis “until we see the current situation begin to normalize” – which may be a long time coming.

Breedlove is also talking with the Joint Chiefs of Staff about potentially prepositioning equipment and supplies for US-based forces to fall in on in an emergency requiring rapid deployment, he said.

Finally, “the third piece may be the most important piece,” Breedlove said.

“We need to refocus and continue to focus on our readiness.”

During the government shutdown and sequestration budget cuts, US units had to cut back or outright cancel training, with effects “we are still recovering from,” he said.

“We will continue to focus on the dollars.”

Getting those training dollars out the door will be up to Congress when it reconvenes after Tuesday’s elections.