November 20, 2014
BERLIN, Germany -- Russia’s top diplomat blamed the conflict in Ukraine on efforts by other countries to increase their security after the collapse of the Soviet Union. 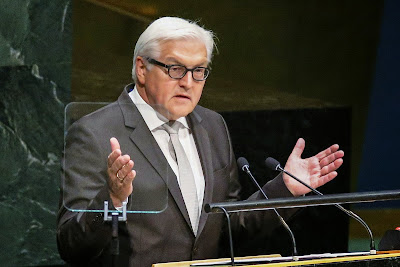 The crisis in eastern Ukraine has intensified since the pro-Russian rebels held Nov. 2 elections that the government in Kiev and its allies condemned as illegitimate.

Ukraine, the European Union and the U.S. blame President Vladimir Putin for supporting separatists and stoking a conflict that has killed more than 4,100 people, according to United Nations estimates.

“We have to keep working to defuse the conflict with the possibilities at our disposal in order to keep the spiral of escalation that looks like it’s starting anew from reaching a speed” that would lead to a resumption of “major military confrontation,” Steinmeier said in Berlin today after talks with Polish Foreign Minister Grzegorz Schetyna.

Steinmeier engaged in a day of shuttle diplomacy yesterday, visiting Putin last night in the Kremlin after meeting top Ukrainian officials in Kiev.

Two Ukrainian troops were killed and 13 wounded in the past 24 hours, the Defense Ministry in Kiev said on Facebook.

Lavrov said Ukraine was conducting an economic blockade that may precede a new military assault by its troops.

That followed a decree from Ukrainian President Petro Poroshenko last week under which the government in Kiev is to cut off financing and services to rebel-held areas.

“Throughout the Ukrainian crisis our country has consistently sought to help Ukraine to overcome this difficult period in its history,” Lavrov said told lawmakers in Moscow.

“Russia can’t stand by and watch what’s happening in a neighboring fraternal country.”

Russia denies involvement in the conflict.

He’s called for new “Geneva format” talks, which would include Ukraine, Russia, the EU and the U.S.

Putin’s government has rejected that plan, saying the format doesn’t involve the separatists.

The four sides produced an agreement in the Swiss city in April to ease tensions after the takeover of the Crimean peninsula and the downing of Malaysian Airlines Flight 17, which Ukraine blames on rebels using a Russian-supplied anti-aircraft missile.

Now Ukraine and its allies say Russia continues to send it heavy weapons and combat troops across its border.

“The best and the most efficient format of conducting talks is the Geneva format,” Yatsenyuk said at a government meeting today.

“We will not have direct talks with your mercenaries. If you want peace, execute the Minsk accord.”