November 30, 2014
BRUSSELS, Belgium -- Russia urged the European Union on Saturday to lift sanctions against Moscow and promised to waive its food embargo, but a top EU official rejected such a move as the bloc imposed fresh measures on Ukrainian rebels. 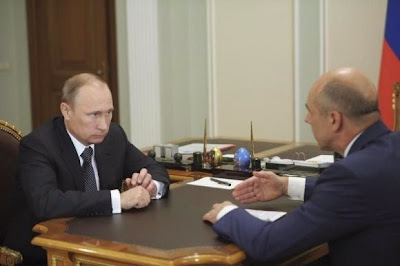 The European Union and the United States imposed economic sanctions on Russia in late July, targeting the Russian energy, banking and defense sectors to punish Moscow's support for rebels in eastern Ukraine, the West's toughest steps yet.

In retaliation, Moscow has banned most Western food imports, worth $9 billion a year.

"We don't expect anything from our European partners. The only thing we expect is for them to leave the meaningless sanctions spiral and move onto the path of lifting the sanctions and dropping the blacklists," Russia's deputy foreign minister, Alexei Meshkov, was quoted as saying by Interfax news agency.

"This, in turn, would allow us to drop our lists."

The gesture from Moscow came as the European Union imposed sanctions on 13 Ukrainians accused of organizing rogue elections in eastern Ukraine on Nov. 2, hitting the separatists and their organizations with asset freezes and travel bans.

"If you don't want a war the only possibility is sanctions ... You have to take sanctions that produce an effect," Juncker told RTL radio in Luxembourg, his home country.

"One has to maintain those sanctions as long as, on the ground, we do not see Russian gestures aimed at pacifying the region," he said, referring to Ukraine.

Meshkov put the losses from sanctions for the EU at $50 billion next year, adding that trade turnover in some products between Russia and Europe had declined by double digit percentages.

A Reuters report this month showed that European exports to Russia fell almost 20 percent in August compared to July because of the sanctions.

Juncker said he did not see the point of constantly threatening more sanctions but warned that more measures could come if Moscow did not take steps to resolve the conflict in eastern Ukraine.

EU officials are concerned that a September ceasefire in Ukraine is not being upheld and say that the vote by rebels in eastern Ukraine was encouraged by Russia to undermine Kiev's sovereignty.

Rebels argued the Nov. 2 vote was the next step after local referendums in May calling for independence from Ukraine.

The United States and European Union denounced the vote as "illegal and illegitimate", but Russia has said it would recognize the result, deepening a crisis that began with the popular overthrow of Ukraine's Moscow-backed president in February and Russia's annexation of the Crimean peninsula.

In its official journal, the European Union said Sergey Kozyakov, who was election commission chief in the Luhansk region "has actively supported actions and policies which undermine the territorial integrity, sovereignty and independence of Ukraine".

Others on the sanctions list are election organizers and separatist ministers in Luhansk and in the eastern region of Donetsk.

They are accused of the same wrongdoing as Kozyakov.