November 30, 2014
DONETSK, Ukraine -- A Russian citizen who favours the death penalty, Eduard Yakubovsky, is trying to become the new face of justice in rebel-held east Ukraine. 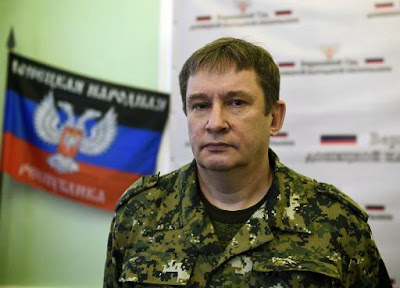 Appointed president of the "Supreme Court" in the self-proclaimed Donetsk People's Republic in late September, the burly ex-investigator from Moscow says he's busy vetting judges as he attempts to set up a legal system in this state that Kiev and the West consider illegal.

Dressed in military fatigues, Yakubovsky, 55, is a far cry from the typical image of a staid magistrate in a gown and suit.

"Believe me, at a time like this, these are the most suitable clothes for the job," he says in an interview at Donetsk city court.

"We haven't yet come up with a dress code for the judges that we'll swear in."

The justice system collapsed in Ukraine's eastern rebel zones after the pro-Russian uprising began in April, with the rule of the gun quickly replacing the rule of law.

Arbitrary and brutal punishments have been meted out by armed commanders with no oversight or accountability.

The United Nations in July accused rebels of conducting a "reign of fear and terror" that has seen people abducted, tortured and even executed.

Since then, online videos and rumours have swirled of popular tribunals handing down death sentences at mob hearings.

Now, as the Kremlin-backed separatists tighten their grip over their territory, they are looking to give themselves the trappings of a legitimate state and greater control over the population.

Yakubovsky, who has a Russian passport but says he has lived in Ukraine for 30 years, claims he is currently sifting through the CVs of judges and lawyers who once worked in the Ukrainian system but now want to sign up to administer rebel law. "

At the moment we're going through all their documents before appointing any judges," he says.

"We have to check the background of each candidate."

It is not just about hiring judges -- the criminal code is also a work-in-progress.

Despite being in a fight to the death with Kiev, Yakubovsky says the rebels have accepted Ukrainian law as the basis for their system "when it doesn't contradict with the our texts".

They have already introduced new laws -- most notably the re-introduction of the death penalty, which was officially banned in Ukraine in 2000.

"We have the death penalty and it will be applied," Yakubovsky says.

Until the new legal system gets up and running, it is down to local commanders to dole out whatever justice they see fit.

"If it is a combatant from our side who has committed an offence then the head of military police decides on the punishment," a rebel tasked with security on Donetsk's streets told AFP.

"If it is a civilian then it is the commander of the group that arrests them that takes the decision," he said, refusing to give his name.

Particularly in their sights are drug takers and dealers who they claim are still operating on their turf.

A man was recently arrested for taking methamphetamine and jailed for 15 days and forced to clean out all the prison cells, the rebel says.

Another individual accused of manufacturing and selling "large amounts" of narcotics has been in jail for three and a half months awaiting trial.

Yakubovsky admits that innocents might have got caught up in the rebel dragnet.

The problem is he doesn't know exactly how many there are and when they will ever come to trial.

"It's true that there could be some innocent people among them," he says.

"We'll see when they go to trial. If that is the case, they'll be set free."