November 02, 2014
MOSCOW, Russia -- Russia and the West appeared bound for even worse tensions ahead of a Sunday vote in rebel-held eastern Ukraine, as Western leaders warned that Russian plans to recognize the elections would further destabilize the conflict-racked nation. 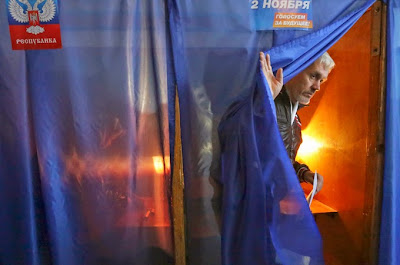 The European Union and NATO have both condemned the polls, which Russia has said it will acknowledge.

A week after the rest of Ukraine elected the most pro-European parliament in its history, pro-Russian rebels who have seized territory in eastern Ukraine are holding a vote Sunday to win popular backing for their leadership.

The vote is in contravention of a Sept. 5 cease-fire agreement that said they should hold local elections in line with Ukrainian law in early December.

With separatist leaders crisscrossing their enclave in an improvised election campaign, Ukrainian leaders and their Western allies have characterized the vote as a step away from peace, not toward it.

Russian leaders, meanwhile, have said the vote will give crucial popular legitimacy to the leaders of the breakaway territories.

But in a sign that Russia recognizes the disruptive power of the elections, President Vladimir Putin convened his security council Friday to discuss the situation in eastern Ukraine, his spokesman said.

The election will have little practical effect on the affairs of the rebel-held territory, and the winners — the current leaders — are preordained, since only unknowns are running against them.

Voters can cast ballots at any polling place, because authorities do not have voter registration rolls.

But Ukraine’s Western allies fear that the vote is another step toward a long-term frozen conflict of the type that Russia has used to exert pressure on Georgia and Moldova.

In those nations, pro-Russian separatists have seized territory and entrenched for years.

They have won little international recognition but have given Russia sway over the central governments.

Russian diplomats have expressed puzzlement about why the West is upset about its plan to recognize the elections.

“They are not holding elections in strict compliance with Ukrainian law, but so what? After all, the result is what counts most,” Vladi­mir Chizhov, the Russian ambassador to the European Union, said on state-run Russia 24 television Friday.

“These are people invested with the public’s confidence, but they want to hold elections to get a democratic mandate so as to represent their population in a negotiating process with Kiev.”

Russian Foreign Minister Sergei Lavrov told Russian news outlets this past week that his nation would recognize the results of the elections, although he did not say whether that meant Russia would also recognize the independence of the territory that rebels and Putin have started to call Novorossiya, or New Russia.

Russia has said it supports efforts toward peace in Ukraine, although it has not taken steps to help Ukraine retake control of rebel-held stretches of the border, another provision of the cease-fire.

Western journalists have seen Russian soldiers in eastern Ukraine in recent weeks, and on Saturday reporters in Donetsk saw a column of dozens of unmarked military trucks and Grad multiple-rocket launchers entering the city from the east.

The planned elections drew an unusually strong condemnation from the normally non-confrontational Organization for Security and Cooperation in Europe (OSCE), which is running an observation mission in Ukraine and helped broker the cease-fire.

OSCE Chairperson-in-Office Didier Burkhalter said in a statement that the “so-called elections” run “counter to the letter and spirit” of the cease-fire.

A spokeswoman for the National Security Council warned that Russia may be planning to step up its involvement in eastern Ukraine.

“We caution Russia against using any such illegitimate vote as a pretext to insert additional troops and military equipment into Ukraine,” said NSC spokeswoman Bernadette Meehan, who added that there were “recent indications” that Russian forces are again gathering at the border with Ukraine.

The violence has led to the worst relations between Russia and the West since the Cold War.

Western leaders have said that the cease-fire was intended to facilitate the eventual reintegration of the separatist-controlled areas with the rest of Ukraine, albeit with vastly more local political power and autonomy.

Rebels have moved quickly to start setting up the structures of an independent government, although they have said it will take some time before they are fully operational.

Ukraine, too, has taken steps to wall itself off from rebel territory, including deploying border guards last week to monitor a new internal frontier.

“Any state is in the state of being built as long as it exists. We are in the process of building ours,” said Andrei Purgin, the self-proclaimed deputy prime minister of the separatist Donetsk People’s Republic, by telephone.

He said that he thought it would take 10 years to be fully stable and independent.

The current leader of the rebels in Donetsk, Alexander Zakharchenko, 38, is a local mine electrician who took over as head of the rebels from a Russian citizen in August.

He has campaigned on a quixotic populist platform, while acknowledging that there is little money for now to help fulfill his goals.

Rebels have struggled to find funds to pay pensions and for salaries for civil servants and teachers.

They have been silent about the source of what little money they have.

“I want our pensioners to have enough money to travel to Australia at least once a year to shoot a dozen or a dozen-and-a-half kangaroos on safari,” he told workers this past week at a coal mine in Makeevka, an industrial city that adjoins Donetsk.

In separate parliamentary elections held in the rest of the country Oct. 26, the party led by Prime Minister Arseniy Yatsenyuk narrowly topped President Petro Poroshenko’s party, an unexpected result that suggests that Ukrainians are receptive to his less-conciliatory policies toward Russia.

The two leaders are allies, but Yatsenyuk nevertheless has been critical of the cease-fire deal and has advocated fighting harder to regain rebel-held territories.

Poroshenko said Friday that the prime minister should remain in his position, meaning that there will be a powerful voice in Ukraine’s leadership in favor of a harder line against Russia and the rebels.