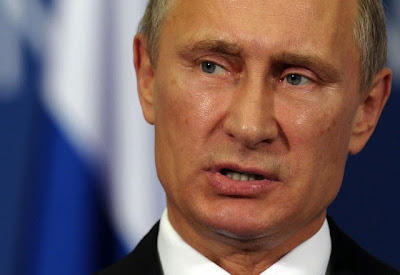 Russian President Vladimir Putin, who was told by fellow leaders to stop arming pro-Russian rebels, said he was leaving the G-20 gathering early to get some sleep on the flight home before today’s meetings.

“You want the Ukrainian central authorities to annihilate everyone there, all of their political foes and opponents,” Putin said in an interview yesterday with Germany’s ARD television.

“Is that what you want? We certainly don’t. And we won’t let it happen.”

German Chancellor Angela Merkel said yesterday the EU will keep its economic sanctions on Russia “for as long as they are needed.”

EU foreign ministers convened today in Brussels to discuss adding to sanctions that have limited access to capital markets for some Russian banks and companies and blacklisted officials involved in the conflict.

“Sanctions in themselves are not an objective, they can be an instrument if they come together with other measures,” European Union foreign policy chief Federica Mogherini told reporters before the meeting.

She said the EU’s three-track strategy consists of sanctions, encouragement of reforms in Ukraine and dialogue with Russia.

Six Ukrainian soldiers were killed and nine were wounded in fighting over the past 24 hours, military spokesman Colonel Andriy Lysenko told reporters today in Kiev.

He said government forces killed about 20 rebels and wounded 30 in one incident.

“We are very concerned about any possible ethnic cleansings and Ukraine ending up as a neo-Nazi state,” Putin said according to an English translation of his remarks published by the Kremlin.

The ruble headed for a record low as oil traded near the weakest in four years.

Putin was told by Group of 20 leaders to stop arming pro-Russian rebels at a two-day summit that ended yesterday in Brisbane, Australia.

Russia rejects accusations that it’s supplying manpower and weapons to support the insurgents who have carved out separatist-controlled zones in eastern Ukraine.

Putin said his counterpart in Ukraine, Petro Poroshenko, made a “big mistake” by moving to sever banking services and pull out state companies from two breakaway regions.

“Why are the authorities in Kiev now cutting off these regions with their own hands?” Putin told reporters in Brisbane.

The government in Kiev is moving to revoke a law on greater autonomy and cut off links with rebel-held areas of the Luhansk and Donetsk regions after they held elections two weeks ago that Ukraine considers illegitimate.

The ballots, which were also condemned by the U.S. and European countries, raised tensions and threatened to plunge the region into open warfare again.

Ukrainian Prime Minister Arseniy Yatsenyuk already said Nov. 5 that the government will withhold budget payments totaling about 34.2 billion hryvnia ($2.2 billion) to parts of the country under the control of militants.

Under a presidential decree issued Nov. 15, state companies and institutions were ordered to suspend work and evacuate employees with their consent.

The central bank must stop Ukrainian lenders from servicing accounts used by individuals and companies in the breakaway areas, according to the document on Poroshenko’s website.