Putin Resumes His Chipping Away At Ukraine

November 06, 2014
MOSCOW, Russia -- Russia has taken another significant step toward creating a puppet state inside Ukraine. 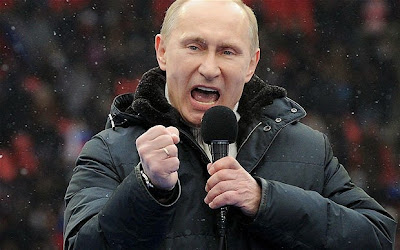 The Russian dictator Putin will continue to chip away at Ukraine.

Over the weekend the Moscow-controlled cities of Donetsk and Luhansk and nearby areas staged “elections” for the leaders of what Russian President Vladi­mir Putin calls Novorossiya.

In so doing, they directly violated a Sept. 5 cease-fire agreement for eastern Ukraine that Putin had endorsed.

Having promised to respect Ukrainian sovereignty (not counting Crimea), Russia now supports the renegade election and says the Ukrainian government should negotiate with separatist leaders.

Meanwhile, Russia and its proxies appear to be preparing for a new round of aggression.

On Sunday, the Kiev government and Western journalists reported a renewed flow of troops and armor from Russia into the Donetsk area.

This is another violation of the cease-fire agreement, which called for the withdrawal of Russian weapons and troops from Ukraine and the sealing of the border under international ­observation.

It’s not hard to guess what Putin has in mind.

As it stands, the Donetsk-Luhansk ministates are not easily sustained; they lack a port, power supplies and access to the region’s principal airport.

Alexander Zakharchenko, declared the winner in the “Donetsk People’s Republic,” is on record as saying his regime intends to capture the Ukrainian-held port of Mariupol as well as several large towns retaken by government forces last summer.

In violation of the cease-fire, Russian-led forces already have been fighting to capture the Donetsk ­airport.

Once “Novorossiya” is consolidated, Putin will have achieved his principal strategic aim in Ukraine.

He already has incorporated a sizable piece of Ukraine, the Crimean Peninsula, into Russia, and human rights assaults on the Tatar minority there go pretty much unremarked in the West.

Now he will be able to use the territory he controls in eastern Ukraine to permanently destabilize the government in Kiev and ensure that it does not fulfill its mandate to economically integrate Ukraine with the European Union.

It’s the same strategy he has pursued in Georgia and Moldova, where “frozen conflicts” created and sustained by Russia have endured for decades.

If the Obama administration and its European Union allies have a plan to prevent Putin from completing this coup, it isn’t evident.

The Kremlin has shrugged off Western sanctions while compensating Putin’s cronies for their losses.

But both governments have refused Ukraine’s increasingly desperate requests for military assistance, including defensive weapons, that might deter a new Russian offensive.

On Monday Vice President Biden went out of his way to correct himself after saying that Russia had “invaded” Ukraine; the White House still bans that term, as if lexicological make-believe will somehow erase the thousands of Russian troops stationed inside Ukraine.

More worrying is the administration’s make-believe about its policy, which officials actually seem to believe has been a success.

Mr. Biden said of the crisis: “We’ve put it under control.”

In fact, a big chunk of eastern Ukraine is now under the control of Putin — and it will be Moscow, not the White House, that determines what happens next.