November 24, 2014
BERLIN, Germany -- Germany’s foreign minister expressed concerns that Russia is seeking to split up Ukraine by supporting separatists in the east as President Vladimir Putin defended his stance in the conflict. 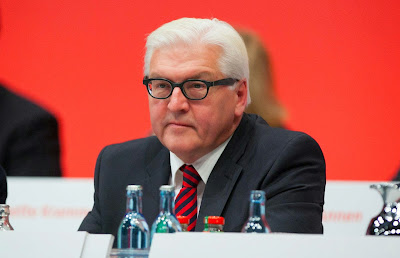 “I’m taking Russia at its word that it doesn’t want to destroy the unity of Ukraine,” Der Spiegel magazine cited the German minister, Frank-Walter Steinmeier, as saying in an interview.

“The reality, however, is speaking a different language.”

The conflict in the Luhansk and Donetsk regions of Ukraine along the Russian border has claimed more than 4,300 lives and laid much of the local infrastructure to waste.

The European Union and the U.S. accuse Russia of not abiding by a September truce signed in Minsk, Belarus, and Ukraine says Russian troops and vehicles continue to cross the frontier.

Putin defended Russia’s annexation of Ukraine’s Crimea peninsula this year and its sympathy for the separatist cause in eastern Ukraine in an interview with Russia’s Tass news agency published yesterday.

People in Luhansk “perceive themselves as parts of the greater Russian world,” Putin said.

“As soon as we rise, some other nations immediately feel the urge to push Russia aside, to put it ‘where it belongs,’ to slow it down.”

Still, Steinmeier warned against breaking off lines of communication with Putin, who faced a barrage of criticism over Ukraine at the Group of 20 summit in Brisbane, Australia, a week ago and left the talks early.

The war of words over Ukraine had become “dangerously swollen,” Spiegel cited the German minister as saying.

He gave no information about casualties among Ukrainian forces.

The city council in Donetsk said that a number of buildings were destroyed in shelling, while parts of the city were without gas, power or water.

In another development, a train carrying debris from the Malaysia Airline System Bhd. (MAS) jetliner downed over a separatist-held area in July left for Kharkiv, a city under government control, yesterday, Tass reported.

The wreckage, packed into 12 rail cars, will be taken to the Netherlands, where it will be examined by air-safety officials.

The conflict has intensified since rebels in Donetsk and Luhansk held elections earlier this month.

The self-proclaimed Donetsk People’s Republic announced yesterday that Russia had sent tens of thousands of textbooks to the region for local schoolchildren.