Nowhere To Run In Eastern Ukraine 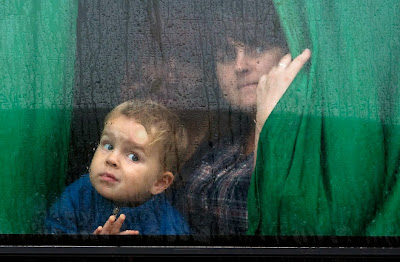 Officially, a cease-fire has been in effect in the rebel areas of eastern Ukraine since September.

But with war once again looming, and artillery blasts regularly shaking the night in the capital, Donetsk, things are far from returning to normal.

Another clear sign of that is the obvious depopulation of much of the rebel-held territory.

Though exact estimates vary, roughly 1.5 million people have left the rebel-held territory in eastern Ukraine, out of a prewar population of about 4.5 million.

United Nations figures suggest that about half went to Russia and half to other areas of Ukraine.

Today, for every two people who stayed, one has left, but the raw numbers do not capture the true nature of the catastrophe.

By and large, it is the young, the educated, parents with children and those with means who have left, while the aged, the desperate and the destitute have remained behind.

“I would leave if I had anywhere to run to,” said Aleksei Ivanenko, 38, a now unemployed professor at the once well-regarded Donetsk law school, called the Legal Institute.

Along with the danger of shelling from cease-fire violations by both sides, a deep sense of uncertainty about career prospects looms over the separatist areas.

Lawyers, for example, have no obvious role here now because courts are closed.

The first separatist courts are scheduled to open only in December, and no one knows what to expect from them.

“In Donetsk, there’s no possibility for professional self-realization,” Stanislav Klypatsky, 27, a lawyer who moved to Kiev over the summer, said in a phone interview.

The headquarters skyscraper of Metinvest, a steel and coal company, is mostly empty, its executives having fled the territory after backing the central government in the summer’s battles.

Ukraine has relocated professors and administrators at Donetsk National University to another city, Vinnytsya, in western Ukraine, for the academic year.

Ukraine’s national security and defense council has said that about three million people live in rebel-controlled areas in the Donetsk and Luhansk People’s Republics, defined as the territory inside the so-called line of control along the front at the time the cease-fire was reached on Sept. 5.

Rebel estimates are roughly the same.

Donetsk City Hall, which issues estimates of the population based on the amount of bread bought in stores, says that 800,000 people now live in the city, down from a prewar population of about one million.

Many people who returned to rebel-held areas after the cease-fire have come to rue that choice, as the fighting goes on, and even threatens to escalate.

This month, even the most jaded in Donetsk were terrified after an artillery shell slammed into a soccer field, killing two teenagers and seriously wounding five people.

The abandonment of pets, all too common in war zones, is now plaguing the city, with stray dogs loping through the streets, so accustomed to explosions they hardly react when a shell lands nearby.

Donetsk’s main dog shelter, called Pif, after the name of a stray, typically houses 600 dogs, but now has 800 in its care.

“I never imagined so many people would abandon their dogs,” Viktoria I. Vasiliyeva, the manager, said during a tour of the shelter.

“A lot of people relate to dogs like things that can be thrown away when not needed. But I won’t judge people now. It’s a difficult time.”

The depopulation is most sadly obvious in schools.

Rebel-held areas have retained about half their prewar population of children.

In an 11th-grade Russian class, framed portraits of Leo Tolstoy, Fyodor Dostoyevsky and the poet Mikhail Lermontov stared down at rows of empty desks.

The few students who braved the day’s shelling to attend took dictation, ignoring the booms outside the window.