November 28, 2014
KIEV, Ukraine -- Ukraine's president set out a strongly reformist agenda during the inaugural session of parliament Thursday, calling for the immediate overhaul of a justice system he said was corrupted from the top down. 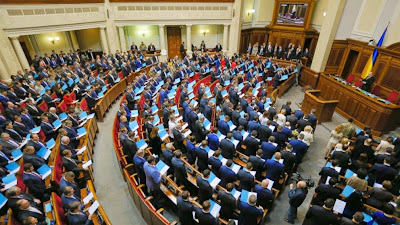 Newly elected Ukrainian parliament deputies swear their oath during the inauguration cermeony in Kiev, Ukraine, Thursday, Nov. 27, 2014. Ukraine Parliament has opened for its first session since an election last month that ushered in a spate of pro-Western parties.

Combatting corruption and re-orienting Ukraine toward Europe, and away from Russia, have been dominant themes of national politics since former President Viktor Yanukovych was ousted in February after months of protest.

Since a vote last month that ushered in a raft of pro-Western parties, Yanukovych's Party of Regions is no longer represented in parliament, although some of his erstwhile allies were elected within the Opposition Bloc.

"It is quite clear that the primary reason for the low standard of life of the majority of Ukrainians is the totally corrupted government apparatus," he said.

Poroshenko said Ukraine should shed prohibitions forbidding it from joining military blocs such as NATO.

"The non-aligned status voted for in 2010 has not been able and will not be able to guarantee the security and territorial unity of our country," he said.

The new parliament draws together a colorful variety of political figures, including crusading anti-corruption campaigners, commanders of paramilitary units fighting Russian-backed separatists in the east, and remnants of Yanukovych's entourage.

One deputy, Nadezhda Savchenko, is awaiting trial in a Russian prison after she was captured by Russian-backed militia during fighting in eastern Ukraine in June.

A photo of a parliamentary oath signed by Savchenko flashed on a screen in parliament during the inauguration.

Those groups, along with the Fatherland party of former Prime Minister Yulia Tymoshenko and the Radical Party, make up the coalition.

Poroshenko said in his speech to parliament that the coalition would strive to maintain the unity of Ukraine, which has been severely tested by Russia's annexation of the Crimean Peninsula and ongoing fighting against separatists.

"There will be no federalization."

That was a veiled rebuke of European Union Council President Herman Van Rompuy, who suggested this week that decentralizing power in Ukraine could allow for dialogue with Russian-backed separatists.