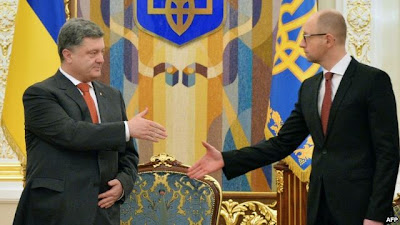 Ukrainian President Petro Poroshenko (L) and Prime Minister Arseniy Yatsenyuk before a meeting of the national security council in Kiev in early November.

The five pro-Western parties that passed the 5 percent threshold in last month's parliamentary elections control a total of 288 seats in 421-seat parliament.

They reportedly hammered out a draft agreement early on November 21, after hours -- and indeed weeks -- of negotiations.

The official signing of the coalition agreement is expected to take place at the first session of the new parliament scheduled for November 27.

Prime Minister Arseniy Yatsenyuk said at a ceremony to initial the document that the coalition would be made up of 300 legislators out of a total of 450 seats.

He also said that new Cabinet would be established in 10 days, adding that preparation of the agenda of the new government was under way.

Ukrainian media reports cite participants as saying that besides joining NATO the coalition also agreed that the return of Russian-occupied Crimea under Ukrainian control will be one of its major goals.

It also mentioned as a priority the protection of the legal interests of Crimean Tatars, as well as all Ukrainian citizens living in "occupied territories."

The parties also agreed on working together toward Ukraine’s integration into the European Union.

The coalition also called for permanent military bases in the country's east, where the Ukrainian army is fighting a pro-Russia insurgency, and for the allocation of at least 3 percent of the nation's gross domestic product for defense.

Additionally, the parties agreed to cancel immunity for lawmakers, reform the election system, ban Soviet and Nazi symbols, and decentralize the power structure.

The parties also agreed to thoroughly investigate the killings of protesters on Kiev’s Maidan -- Independence Square -- in February 2014.

The agreement was expected to be officially presented in parliament later on November 21.

Out of a total of 421 candidates elected to the Verkhovna Rada in the October 26 polls, 225 were elected based on party lists, and 196 in districts using a first-past-the-post electoral system.

U.S. Vice President Joe Biden, who arrived to Kiev on November 20, held talks with President Petro Poroshenko in the Ukrainian capital on November 21.