In Ukraine, Shelling And Convoys Of Armed Trucks Threaten Cease-Fire 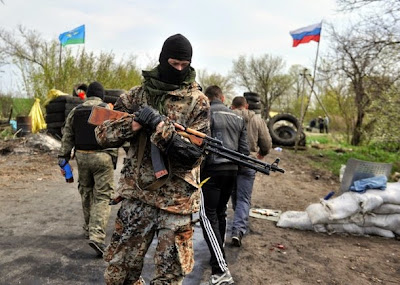 The monitoring group, the Organization for Security and Cooperation in Europe, said that long columns of unmarked military vehicles, some towing howitzers, were spotted over the weekend.

The monitors did not speculate as to the origins of the trucks or the people inside them, but Ukrainian officials said the statements bolstered their claims that Russia was again arming and training separatists.

The O.S.C.E. reported that its observers had driven on Saturday past a column of more than 40 trucks on a highway outside Donetsk.

The trucks were covered with tarpaulins and “without markings or number plates — each towing a 122 mm howitzer and containing personnel in dark green uniforms without insignia,” the O.S.C.E. statement said.

On Sunday, after what journalists in Donetsk described as the heaviest night of artillery shelling in and around the city in at least a month, the O.S.C.E. observers saw two more unmarked military columns.

The observers noted 17 trucks in each column, some equipped with Grad ground-to-ground rocket launchers and others towing more howitzers.

Most Russian troops withdrew from eastern Ukraine after cease-fire agreements signed in Minsk on Sept. 5 between pro-Russian rebels and Ukraine, NATO said last week; the Russians say they had never been there.

As fighting has picked up in recent days, however, authorities in Kiev have said that Russia soldiers are returning.

Mr. Lysenko said that a column of 32 Russian tanks had entered rebel-held areas of eastern Ukraine on Saturday, and that three Ukrainian soldiers had been killed and 13 others wounded in fighting overnight Saturday into Sunday.

Didier Burkhalter, the Swiss foreign minister and the monitoring group’s chairperson-in-office, said on Saturday after this sighting that he was “very concerned about a resurgence in violence in the eastern regions of Ukraine and about activities leading to more fragility instead of further stabilization.”

The statement also referred to civilian casualties inside Donetsk as a result of shelling.

In Washington, Bernadette Meehan, the spokeswoman for the National Security Council, issued a statement expressing concern over numerous reports, including the O.S.C.E.’s, “that Russian-backed and -supplied separatists are moving large convoys of heavy weapons and tanks to the front lines of the conflict.”

“Any attempt by separatist forces to seize additional territory in eastern Ukraine,” the statement added, “would be a blatant violation of the Minsk agreements.”

Separatists say all their weapons were captured on the battlefield as “trophies” or plundered from Soviet-era weapons depots.

A military commander in the Donetsk People’s Republic, Eduard Basurin, told the Russian state news agency RIA that the trucks, howitzers and rocket launchers noted in the O.S.C.E. report were those of the rebels.

“This column belongs to the militia, what else could it be?” Mr. Basurin told the news agency.

The separatist army was shifting forces from one part of the front to another, he said, referring to the convoy of more than 40 trucks seen on Saturday.

And the column appeared long because it included support personnel, though by “militia standards” it was not large, he said.

“It just seemed big,” he said.