November 21, 2014
WASHINGTON, DC -- The United States plans to increase non-lethal military assistance to Ukraine, including deliveries of the first Humvee vehicles, having decided for now not to provide weapons, U.S. officials said. 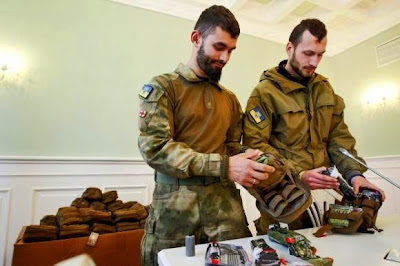 Medical volunteers unpack individual first aid kits similar to those used by NATO during a ceremony where they were donated by Kiev's Mayor Vitaly Klitschko in Kiev October 31, 2014.

The increase in non-lethal aid to Ukraine, which is grappling with a Russian-backed separatist movement in its east, is expected to be announced on Thursday during a visit to Kiev by Vice President Joe Biden.

The officials, who spoke on condition of anonymity, described it as an expansion of U.S. support for Ukraine's armed forces, but one that was unlikely to significantly alter the conflict.

The aid falls short of what Ukrainian President Petro Poroshenko requested during a visit to Washington in September when he appealed for lethal aid - a request echoed by some U.S. lawmakers in response to what NATO allies say is Russia's movement of tanks and troops into eastern Ukraine.

Officials in the Obama administration had said Washington believed Ukraine had enough lethal aid and the types of weaponry requested for Ukraine would be of only marginal value.

They had also emphasized the need for a diplomatic outcome.

The United States and its European allies have imposed several rounds of economic sanctions on Russia for its seizure of Crimea and invasion into eastern Ukraine.

The new non-lethal aid Biden will present in Kiev includes Humvees from excess supplies in the Pentagon's inventory, as well as the delivery of previously promised radars that can detect the location of enemy mortars, officials said.

They did not specify a dollar value for the assistance.

Previous non-lethal aid to Ukraine includes $53 million announced in September for military equipment such as counter-mortar detection units, body armor, binoculars, small boats and other gear for Ukraine's security forces and border guards in the east.

President Barack Obama's administration has long debated providing weapons to the Kiev government, but has so far concluded that it might only prompt Russia to escalate its aid to the separatist rebels.

Lethal assistance "remains on the table.

It's something that we're looking at," Obama's deputy national security adviser and nominee for deputy secretary of state, Tony Blinken, said at his Senate confirmation hearing on Wednesday.

In response to Blinken's comment, Russia warned the United States on Thursday against supplying arms to Ukrainian forces.

Hours before Biden was due to arrive in Kiev, Russian Foreign Ministry spokesman Alexander Lukashevich cautioned against "a major change in policy of the (U.S.) administration in regard to the conflict" in Ukraine.

U.S. Senator John McCain, an Arizona Republican, said he had not been briefed on the new non-lethal aid but called it "a continuation of the ridiculous."