November 17, 2014
BRUSSELS, Belgium -- European Union governments may agree to impose personal sanctions on more Russian-backed rebels on Monday in response to a separatist vote in eastern Ukraine, but are unlikely to discuss new steps against Russia itself until mid-December, officials said. 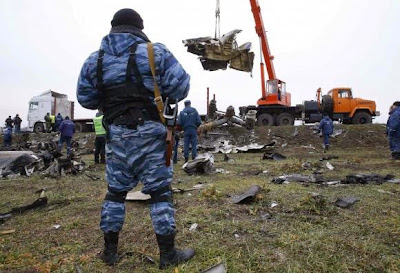 A pro-Russian separatist watches as a crane carries wreckage of the downed Malaysia Airlines flight MH17 at the site of the plane crash near the village of Hrabove in Donetsk region, eastern Ukraine November 16, 2014.

EU foreign ministers discussed how to respond to the Nov. 2 separatist election, which they say has no legal basis, as well as ways to launch reforms in Ukraine and engage Russia in finding a solution to the conflict.

"We will discuss what will be the best option today to react to the so-called elections on November 2, which we all said were illegal and illegitimate and might require some reaction from the European Union's side," EU foreign policy chief Federica Mogherini told reporters on arrival for the talks.

Ministers are expected to agree to add more Russian-backed separatists to a list of people banned from entering the European Union and those whose EU assets are frozen.

But ministers remain divided on the need for tougher economic sanctions on Russia, despite NATO's assertions - denied by Moscow - that Russia has sent tanks and troops to eastern Ukraine in recent days.

Czech Foreign Minister Lubomir Zaoralek said his country was ready to support sanctions on people but new economic sanctions against Russia were only likely to be discussed by European leaders at their next summit on December 18 and 19.

An international rights group said on Monday Russia should investigate increasing accusations of human rights abuses against Ukrainian activists and Muslim Tatars in the newly annexed territory of Crimea.

"In the past eight months, the de facto authorities in Crimea have limited free expression, restricted peaceful assembly, and intimidated and harassed those who have opposed Russia's actions in Crimea," Human Rights Watch said in a 37-page report.