East Ukraine: Back In The USSR

November 20, 2014
DONETSK, Ukraine -- They shuffled in the hallway wrapped up to withstand the cold, waiting to register documents with the health authorities of the separatist authorities in the breakaway Donetsk People’s Republic, and as they waited they shared whispered complaints about their new political knyaz (masters) taking care not to be overheard. 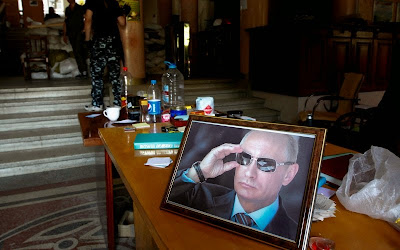 “Separatist fighters came into our district and started firing shells at the airport,” a gray-haired babushka told four other elderly people.

“The shells went astray and hit buildings in the district. And we asked them why did you do this, but they didn’t reply.”

A companion murmured: “You can’t complain or they’ll put you on an enemies list.”

Donetsk, formerly a make-believe republic, is turning into a little neo-Soviet state.

A few months ago it was under the heel of people who had no idea how to administer the provincial building they claimed as headquarters let alone rule an oblast of four million people.

When they stormed the local state treasury to seize money, the treasurer had to explain the intricacies of state finance and that tax proceeds were not stored in cash in his building.

The Moscow-backed insurrectionists who seized control of both the eastern Ukraine oblasts of Donetsk and Luhansk were blithely ignorant of the basic mechanics of practical politics—let alone state making.

As The Daily Beast reported in the spring, their naiveté stood in marked contrast to the gravity of the position they found themselves in: at the center of an effort to dismember a real country and in the middle of the biggest East-West standoff since the Cold War.

Official Donetsk Republic business was log-jammed because the high command had only one stamp for documents and identity papers.

The insurrectionists seemed actors in a surreal episode of revolutionary play-acting in which the curtain was about to fall.

Now the state has more than one stamp and is burdened by forms and regulations and stony-faced bureaucrats who bark orders at supplicants and keep petitioners hovering nervously on the threshold of their offices.

The fantasists, cranks and eccentrics, who filled the ranks of those trying to administer a state, have gone, replaced by steely-eyed men and women brought in during a makeover that started after the downing of Malaysia Airlines flight 17.

The top leader of the insurgent republic at the time, Dennis Pushilin, sent in his letter of resignation while on a visit to Moscow.

Along with more government goes a greater potential for corruption.

In some ways the local power structures that made the industrial region of the Donbass a state within a state is reasserting itself, and people here see Moscow’s hand in the makeover.

Many of the apparatchiks now are drawn from the old Party of Regions of ousted president Viktor Yanukovych—a pro-Moscow political mafia that integrated hard-nosed local politicians, mobsters and oligarchs and then proceeded to expand from its base in Donetsk to defeat the Orange Revolution and mount a takeover of the whole of Ukraine.

The old culture of the Party of Regions—its lack of transparency, the graft and the shady deal making—has returned.

With it has come some efficiency, at least in comparison to the anarchy that preceded it in the early weeks of the pro-Moscow Donetsk People’s Republic.

Even before Ukraine’s President Petro Poroshenko ordered at the weekend the withdrawal within seven days of all public services, including funding for hospitals and schools, the insurgents had started the process of registering businesses in preparation for taxing them.

And a business tax rate of 20 percent has already been set.

The insurgency’s leaders are exploring how they can connect to Russia’s energy-generating system and they are trying to find ways to sidestep the impending end of banking and credit card services by looping into the Russian electronic banking network.

“For about half of our sales people use credit cards,” says Maxim, who runs an electronics store in a shopping mall in downtown Donetsk.

“We need a way round an economic blockade.”

Along with more government goes a greater potential for corruption— an endemic problem for the whole of Ukraine, admittedly, but one that the movers-and-shakers in Donetsk are especially smart at organizing.

At the favorite watering holes of Donetsk’s new neo-Soviet knyaz, the bars at the Ramada and the Park Inn hotels, shifty businessmen sit with equally suspicious-looking rebel leaders to discuss deals.

Some speak Russian with the local Donbas accent, but you can also pick out Muscovites and accents from St. Petersburg and Rostov-on-the-Don.

On Monday night one Muscovite was explaining firmly on his phone how a deal involving the moving of a consignment of goods from the southeast Ukrainian port at Mariupol would entail a 70 percent kickback for him.

The wheeling-dealing sometimes goes too far—or at least offends someone more rapacious.

Last week, separatist fighters arrested two of the republic’s politicians—Alexei Granovsky, the energy minister, and a deputy prime minister, Alexander Kalyussky— for abusing their power, in other words for corruption.

For several months the portly, cigar-smoking Kalyussky lorded it over the crowd at the Ramada where he resided with two eye-catching blond companions.

He was behind the detention in July of a freelance fixer working for CNN and an altercation with a CNN cameraman after they had returned from filming the crash site of Malaysia Airlines flight 17.

In much the same way that the politics of the self-proclaimed republic has become more systematized and organized, so too have the fighters.

When the insurgency began after the ouster of the Moscow-backed Yanukovych, the ranks of the separatist fighters were full of capricious local leaders and unstable semi-camouflaged gunmen, or club-wielding unemployed youths eager for status.

They would enforce arbitrarily what passed for order in the insurgency’s flashpoints, and every encounter with a rebel checkpoint was unpredictable.

Their fighting was poorly coordinated, their weapons were vintage pieces, mostly seized from the Ukrainian military.

The separatist fighters speak with a variety of Russian accents and many come from Russia’s Caucasus region, with Chechens and Ossetians the most conspicuous.

And unlike in the early days of the self-proclaimed republic, they make no bones about their origins or military background back in Russia, although they do insist they are “volunteers” and weren’t sent by Moscow.

They say there are many “volunteers” and the Ossetians and Chechens are at the forefront of training them.

“I felt I had to come here to fight neo-Nazis,” the bearded twenty-eight-year-old Alan told me over a beer in the Beertown restaurant in Donetsk.

A bear of man with a gnarled left ear, Alan said he had fought with Ossetian separatists in the 2008 five-day war against Georgia, which he sees as an action to keep NATO from enlarging itself.

He fought alongside Russian forces in the heaviest fighting of the brief war at Tskhinvali, forcing Georgian forces to retreat.

“Two of my grandparents were killed here in Ukraine during the Second World War fighting against the Fascists and I have to finish their work,” he says.

Alan and his Ossetian comrades who joined us view the Maidan uprising that toppled Yanukovych as the work of NATO, the Americans and Europeans—part of an attack on Mother Russia.

“NATO bullied us in Georgia and now they are doing the same again here, and we have to stop them,” says Alan.

“This is the land of my ancestors and I have to participate. If you don’t stop Fascists, they grow, and when we have finished here in the Donbass, we will then go to Kiev and further west to Lviv.”