November 17, 2014
DONETSK, Ukraine -- Investigators on Sunday began winching large pieces of wreckage from the Malaysia Airlines passenger jet shot down over Ukraine last summer onto trucks to transport them back to the Netherlands, the Dutch Safety Board announced in The Hague. 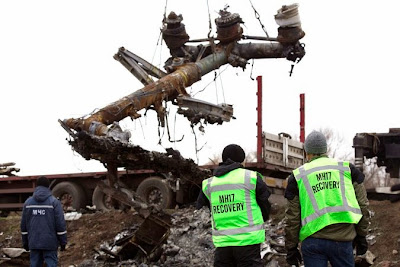 Dutch investigators watched large pieces of wreckage from the Malaysia Airlines passenger jet shot down over Ukraine being loaded onto trucks on Sunday.

The Dutch investigators said that they could not predict how long the operation would last, but that it would take at least several days.

Ever since Flight 17 was shot down in July en route from Amsterdam to Kuala Lumpur, Malaysia, killing all 298 people on board, fighting in the area has interrupted attempts to study the wreckage.

But the race against time has become more pressing as investigators try to finish their work before winter sets in and snow blankets the area.

The current plan is to collect as much wreckage as possible near the crash site, then take it to an airport in the eastern city of Kharkiv for a flight back to the Netherlands, the statement said.

The safety board plans to reconstruct a section of the aircraft as part of its investigation.

Investigators were working with observers from the Organization for Security and Cooperation in Europe as well as representatives of the self-proclaimed Donetsk People’s Republic, which controls many of the fields and villages where debris landed.

In the meantime, the accusations and counteraccusations continue over who shot down the plane.

The general explanation in the West is that separatists wielding a Russian-supplied surface-to-air missile brought down the Boeing 777, mistaking it for one of the Ukrainian military aircraft they had shot down in previous weeks.

The rebels deny any role in the downing, and Moscow has long said that it does not arm the separatists.

Two Russian state television stations broadcast a video over the weekend that they said proved Russia’s claim that a Ukrainian fighter plane had fired the deadly projectile that brought the plane down.

Some Russian bloggers denounced the video as a crude fake.

The preliminary report by Dutch investigators released in September said that the plane had been peppered with “high-energy objects,” but it did not assign blame.