Despite Cease-Fire, Ukraine Conflict Grinds On, With Deaths Mounting

November 28, 2014
PISKY, Ukraine -- Since a cease-fire was declared in eastern Ukraine on Sept. 5, nearly 1,000 soldiers and civilians have died in a grinding conflict with rebel separatists that is being waged largely out of sight. 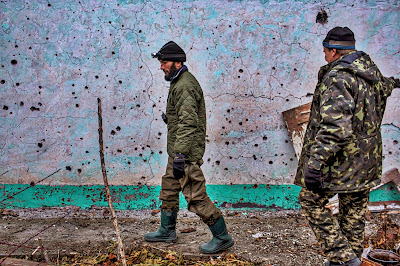 Members of a Ukrainian militia walk past a house riddled with shrapnel.

That is almost a quarter of the 4,317 killed since April and an average of 13 a day, the United Nation estimates.

And Russia has continued to build up the rebel forces, sending in troops, military vehicles and heavy weapons, including what Ukraine says was a convoy of 85 vehicles this week carrying heavy armor, fighters and ammunition.

All this has made for a nervous few months for the Ukrainian soldiers in the village of Pisky, who endure almost constant shelling, sniper fire and raiding parties from the rebel separatists only a mile away on the front lines of a confrontation that carries the potential, at almost any moment, of exploding into a hot new theater in a revived Cold War.

The front zigzags through a glum tableau of abandoned houses, muddy fields and trash-strewn streets, where all but a few retired people have long since fled.

The two sides are only about a mile apart, so close that they can see each other’s positions through a high-powered periscope.

On a recent visit to the Ukrainian side, gunfire broke out near the abandoned house where a soldier calling himself Simferopol and his mates in the all-volunteer Dnipro-1 pro-Ukrainian militia were stationed.

As bullets whistled over a nearby fence, walkie-talkies started crackling.

Eventually, they gave up, as they often do, unable to ascertain the origin of the shooting.

Another Ukrainian unit reported later that it was test-firing a gun, though it was unclear whether this was the same incident.

All the same, after some time, the Ukrainians decided to send off a return volley of mortars, shot in the direction of Donetsk.

“If you cannot see clearly what is happening, you shoot, to ease your soul,” said Simferopol, who took his nickname from his hometown on the Crimean Peninsula, which he left after Russia annexed the territory in March.

He was unsure of the purpose of this firing, or where the next bullets might come from.

“I’m not really a professional,” he said.

“I used to sell Tupperware.”

Simferopol and Ukrainian paramilitary and regular army soldiers deployed in the village say they are fighting defensively, noting that, despite their efforts, rebel lines have been creeping forward.

And yet, the Ukrainian forces regularly fire mortars and artillery toward the separatist lines.

“They shoot at us to remind us they are still there,” Simferopol said of cease-fire violations that run into the dozens of incidents daily.

“And then we shoot at them, to remind them we are still here.”

The two sides may seem dug in, but the rebels have advanced several hundred yards since the cease-fire declaration.

In an interview, Zhora, a commander in the Vostok battalion, a pro-Russian, separatist militia, said he had success in “expanding the lines,” and this was necessary to better defend the flanks of a position that the rebels held before the cease-fire, but was vulnerable for jutting into the Ukrainian zone.

The position had been under attack.

“We moved ahead,” he said, in an interview at his headquarters, where dozens of empty, green wooden boxes for artillery shells were stacked in a parking lot.

“We had no left or right flank. What we did was smooth out the line.”

Pro-Russian soldiers deny receiving aid from Russia, and yet a proliferation of ammunition, howitzers, new uniforms and high-caliber sniper rifles on their side tells a different story.

However enfeebled and impoverished the Ukrainian Army, rebel fighters who were on the ropes in the summer before a Russian incursion could hardly be pushing an entrenched regular army equipped with artillery and tanks without state sponsorship.

Both Simferopol and Zhora say they are fighting to win back their home territory from the other side, but the similarities end there.

A Russian flag adorns Zhora’s headquarters in a warehouse, while graffiti saying “This Is Ukraine” is scrawled on the abandoned house that is Simferopol’s temporary home.

As the pro-Russian line is flush with the city of Donetsk, stray shots by the Ukrainian artillery regularly land in outlying districts of the city.

In Pisky, rebel shelling is a menace to the Ukrainian soldiers but few civilians, since most have left the village.

The only residents to be found were a retired couple, Ivan and Lyubov Siderov, who live in their root cellar in the buffer zone between the two armies and stayed on because “we have a cow, we have a reason to stay.”

They trade milk for bread with the soldiers, and emerge from the cellar only to do chores, and in this way hope to survive until one or the other side wins.

One of the Ukrainian paramilitary soldiers, who uses the nickname Zloy, or Angry, said he was motivated by what he saw as a Russian attempt to oppress Ukrainians, and not for the first time.

“Russia oppresses us and not only for six months in this war, but for centuries, from the time of Peter the Great,” he said.

“There were Cossacks who went to Moscow and kneeled and bowed, and there were those who did not. I’m one of those types.”

With the Russian buildup on the other side, nerves are fraying, particularly in light of a catastrophic defeat for Ukrainian volunteers in the town of Ilovaisk last summer.

There, as here, volunteers fueled by heady patriotism headed for the thickest part of the fight, ahead of the Ukrainian Army.

But a Russian advance then pushed the Ukrainian regulars off a road protecting the retreat, and at least a hundred paramilitary soldiers were killed and hundreds more captured.

“What can we do, a soldier just lives through the day,” said Grigory V. Matiash, a 22-year-old from Kiev, the Ukrainian capital, who volunteered after participating in last winter’s protest in Independence Square.

Such fatalism is understandable in a surreal war zone where boredom is relieved only by deadly attacks, and the sound of .50-caliber sniper fire — first the snap of an incoming bullet, then a boom a moment later — has become background noise.

The separatists and the Ukrainians alike send artillery controllers to spot the flashes of outgoing artillery, and correct answering fire.

While in a sense defensive, as the spotters are intended to silence the other side’s guns, their activities only escalate the small-arms firing, as each side tries to shoot the other’s observers, using infrared scopes.

Also, the Ukrainians sometimes shoot randomly in the direction of their enemy’s lines, something they call “prophylactic fire,” to keep heads down.

After the sun goes down, Pisky becomes an even scarier place, as the buffer zone of abandoned houses becomes a no-man’s land of constant skirmishes between nighttime patrols sent out by both sides.

“Our guys die, and their families suffer,” said one of the Ukrainian fighters, a former Pentecostal preacher who uses the nickname Padre.

“There are widows and orphans. And our government doesn’t want to declare war. We are at war with Russia. Nobody wants to say it, but this is a real war.”