Conspiracy Or Cock-Up In Ukraine?

November 25, 2014
KIEV, Ukraine -- This is what former Ukrainian president Viktor Yanukovych, subsequently driven from office by mass protests in Kiev, said to German Chancellor Angela Merkel just one year ago, at the start of the crisis. 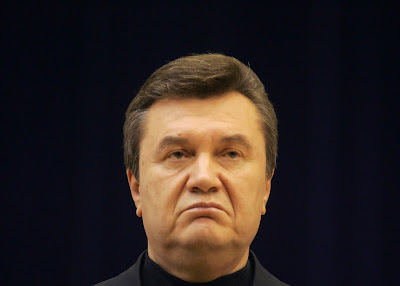 Abandoned by the EU, Yanukovych tried his luck with Russia and look what happened.

It was recorded by a Lithuanian television crew, eavesdropping on the conversation with a directional mike, at the European Union summit in Vilnius where Yanukovych announced that he was not going to sign an EU-Ukraine trade deal.

"The economic situation in Ukraine is very hard, and we have big difficulties with Moscow," Yanukovych explained to Merkel in Russian (which they both speak fluently).

"I would like you to hear me. I was left alone for three and a half years in very unequal conditions with Russia ... one to one."

The Ukrainian president was not overthrown by a "fascist" plot, as Russian propaganda would have us believe, nor was NATO hoping to make Ukraine a member.

Indeed, NATO had repeatedly told the previous Ukrainian government, which was very pro-Western, that under no circumstances could it ever join the Western alliance.

Exactly one year into the crisis, it's useful to remember what really happened.

The basic question you have to ask about any international crisis is: conspiracy or cock-up?

The Ukrainian crisis definitely falls into the latter category.

Nobody planned it, and nobody wanted it.

Here's how they stumbled into it.

Yanukovych inherited the negotiations for a trade deal with the EU from the previous government when he returned to the presidency in 2010.

He was overthrown by the "Orange Revolution" in 2004, after winning a rigged election, but in 2010 he won narrowly but cleanly.

And he didn't break off the talks with the EU because that would have alienated half the country: the western, mostly Ukrainian-speaking part.

Yanukovych was a typical post-Soviet political figure, deeply corrupt and almost comically greedy — the presidential palace he lived in on the banks of the Dnieper was so lavish it could have been in the Middle East — but he was a competent politician.

Almost all his votes had come from the eastern and southern, mostly Russian-speaking parts of the country, but he knew he couldn't simply ignore the west.

On the other hand, he couldn't ignore Moscow either.

Russia's President Vladimir Putin saw the EU as a stalking horse for NATO, and was trying to persuade Yanukovych to join his own "Eurasian Economic Union" (EEU) instead.

Moreover, Russia had huge economic leverage, since it provided most of Ukraine's energy and bought half of Ukraine's exports (mainly coal, steel and heavy industrial goods made in eastern Ukraine).

So for three years Yanukovych temporized, trying to get financial guarantees out of the EU that would make up for the economic punishment Putin would inflict if Ukraine signed the trade treaty.

The EU wouldn't budge: there would be no special help for Ukraine.

It would just have to take its punishment, Yanukovych was told, but the trade deal would be good for the country in the long term.

Politicians have to live in the short term, however, and in 2012-13 Ukrainian exports to Russia fell by half as Putin turned the screws tighter.

The EU had left him "alone for three and a half years in very unequal conditions with Russia ... one to one" — so in late 2013 he made his choice: break off the EU talks, and sign up with Putin's EEU instead.

Did Yanukovych foresee that there would be big demonstrations against him in Kiev, where people had pinned their hopes on association with the EU?

Of course he did, but he probably didn't foresee that the protests would be fuelled by the ham-fisted resort to violence by his own officials.

He certainly didn't foresee that he would ultimately be overthrown — nor did Putin, who had put him in that impossible position.

All the subsequent escalations of the conflict in Ukraine — the Russian annexation of Crimea, the pro-Moscow revolts in the two eastern provinces with the largest ethnic Russian minorities, the direct Russian military intervention that saved those revolts from collapse last August — have been driven by Putin's determination to reverse his original error.

If Ukraine cannot be brought back into Moscow's sphere of influence, then Putin's strategy is to neutralize and paralyze it by maintaining a permanent "frozen conflict" in the east.

In coldly rational terms, Ukraine's best strategy now would be to abandon those two provinces, Donetsk and Luhansk, which are basically open-air industrial museums, and leave it to Russia to subsidize them instead.

But it's not going to do that, because sovereign states never give up territory voluntarily.

Realistically, therefore, Kiev's best option is to strengthen the current ceasefire and let the front lines congeal and stabilize into de facto borders, while maintaining its legal claim to the two provinces.

It remains to be seen if Moscow will even let that happen.