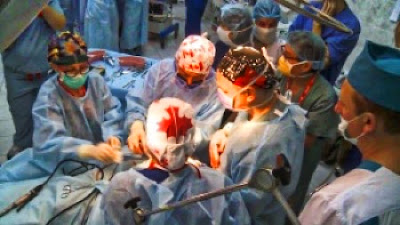 A team of 25 Canadian surgeons, nurses and doctors volunteered for a 10-day mission to Ukraine to help mend the wounded from nearly a year of revolution and war.

He unzips one of them to reveal an assortment of medical devices and surgeon's tools.

"All the devices we need to put facial bones and fractured hands back together again."

Antonyshyn, a plastic surgeon and head of the craniofacial program at Sunnybrook Health Sciences Centre in Toronto, and a team of 24 other surgeons, nurses and doctors volunteered for a 10-day mission this month to Ukraine.

There, they helped mend the wounded from nearly a year of revolution and violent conflict.

Casualties, one as young as 16, were still wearing the scars of the fight to overthrow former president Viktor Yanukovich and then the war with pro-Russian separatists in the east.

The mission, which cost about $150,000, was financed by the Canada Ukraine Foundation, working with Operation Rainbow, a medical humanitarian group.

Dolly Khanna has no ties to Ukraine.

She's a pre-op nurse from Vancouver and has volunteered before on humanitarian missions.

But she's never been close to war.

At Vancouver's airport, she struggled to keep her emotions in check.

"If we can, we should help," she says, barely holding back tears.

"I have teenagers here getting excited about prom and their pictures and there, there are teenage boys who have limbs blown off. It's not fair."

The Ukrainian patients have already had operations to keep them alive.

Now they need another level of surgery to redress a deformity or improve their hand and arm function.

A year of revolution and conflict in Ukraine has overwhelmed medical resources.

Kiev's Military Hospital is one of the best facilities, strained with a revolving door of trauma cases that need high skilled reconstructive surgery.

Nazar Derzhylo was 16 when he snuck out of his parents' house to go to Kiev's Independence Square to help with the student revolution.

He was assisting in a makeshift medical centre when a friend opened what he thought was medical supplies.

Nazar's father Ivan says it was the most terrible night of his life. "I got a call from police.

They said: 'Your son's a terrorist, he's lost his hands and arms, he's not going to survive.' "

He did survive, and he didn't lose his limbs.

He did lose an eye.

The Canadian team reconstructed his eye socket to prepare it for a prosthetic eye.

Then they worked on his eyelid to better match his other eye and to give a teenager a better appearance.

"This boy is one of the main things that made me personally want to come to Ukraine," says Antonyshyn.

For every Canadian medical professional, there was a Ukranian counterpart sharing knowledge and expertise.

With the war in eastern Ukraine ongoing, doctors expect they'll need more skills like these.

The team assessed 60 cases and performed 37 operations in 10 days.

The operating rooms bristled with a swarm of doctors.

Nurses and staff sometimes moved between one patient and another in the same room.

The results are impressive: seven skull reconstructions, repairing jaws, lips, noses and eyelids, along with restoring hand and arm functions.

Dr. Tara Stewart, a plastic surgeon from Toronto, performed a midface reconstruction on 24-year-old Roman Betash, who was shot in the face by a sniper.

"He had a lot of scars and shrapnel still in his face," she says.

"He basically fractured his entire midface."

Betash touched her at a level more deeply than a regular patient-physician relationship.

"It was my first case, very complicated, but I got to see the results immediately. The next day when I saw him, he gave me a big hug, he was so thankful.

He said: 'Thank you, thank you so much, you guys really helped me.'

"I'm very thankful we live in such a great country, where we're not subjected to what they had to go through."

For the medical team, the last day in Kiev was moving.

They made a final check on their patients in recovery, leaving follow-up instructions.

The patients then gave them a large Ukraine flag they had signed and said their goodbyes.

Finally the team shed their surgical gowns and gloves and hopped aboard a bus for a tour of Kiev's now-famous revolutionary landmarks, where many of their patients were wounded.

Operating nurse Stephen Makuch of Victoria stopped in Independence Square to reflect on the past 10 days.

"When we did our last case, we cleaned up our supplies, we came back to the theatres, I walked down the hall it was dark and quiet," he says, his voice catching.

"It was mission accomplished, I guess. We had done our bit."

The team that left Canada to help mend a country had themselves been transformed.

They came home with a sense this is not the end but a beginning of more Canada-Ukraine missions.