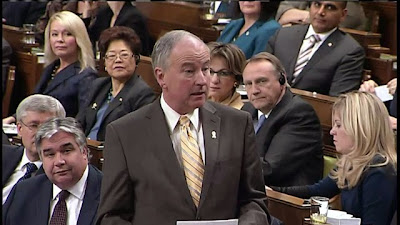 The green clothing dates from the late 1990s, said a Defence official, who also indicated that white camouflage winter smocks will not be among the donated items being loaded on a C-17 transport for a flight Thursday.

The Department of Foreign Affairs will follow up with an additional $5 million in non-lethal aid early in the new year, including a field hospital, tactical radios, night vision goggles and bomb-disposal equipment, Nicholson said.

That portion of the donation will be purchased directly from commercial suppliers and shipped by sea.

Ukraine’s embattled government is only asking Canada for non-lethal aid, he said.

There was also no mention at Wednesday’s announcement about possible next steps in Harper government’s reassurance measures for jittery allies in eastern Europe.

Four CF-18 jet fighters, taking part in NATO air policing missions over the Baltic, are set to return home at the end of December and a senior military planner recently told the Commons defence committee that proposals for possible continued involvement in the alliance’s reassurance mission are on Nicholson’s desk.

The Obama administration and the Pentagon have so far ruled out sending arms, despite pleas from both sides of Congress and a long shopping list from Ukrainian President Petro Poroshenko’s government.

Last week, the U.S. deputy national security adviser told a Senate committee that the administration should review that position in light of the renewed appearance of Russian armoured vehicles in eastern Ukraine.

Anthony Blinken, who has been nominated to be deputy secretary of state, said at his confirmation hearing that the recent moves are a clear violation of the fragile ceasefire brokered between Poroshenko’s government and separatists in September.

Vadym Prystaiko, the outgoing Ukrainian ambassador to Canada, says his country has been receiving much needed non-lethal protective military gear, such as helmets and body armour and he’s hopeful allies will step up with “lethal” equipment.

The latest shipment of supplies out of Canadian Forces Base Trenton, Ont. follows a donation of protective military gear that the Harper government sent over on a C-130J transport in August.

Canada has loudly opposed Russian intervention in Ukraine and Prystaiko praised Prime Minister Stephen Harper for his tough words to Russian President Vladimir Putin at the G20 meeting in Australia.

Harper told Putin he’d shake his hand but said the Russians had to get out of Ukraine.

The encounter made international headlines.

In 2008, Canada was an outspoken supporter of Ukraine’s bid to join NATO, a proposal that was ultimately turned down by the alliance at the time.

Had Kiev been a member, Russia’s annexation of Crimea and support of eastern rebels could have triggered NATO’s self-defence clause.

Poroshenko hasn’t given up on joining NATO and recently said he would hold a referendum on joining the alliance in several years’ time, something Russia said would increase regional tensions.

“This discussion is going,” said Prystaiko, who noted that NATO foreign ministers will discuss the issue next week.

“We’re trying to reform our military to bring it to the standards of NATO. Then we can seriously talk about coming into NATO as a full member. But that is a matter for the future, hopefully not too distant.”