Biden Denounces Russia, But Says Ukraine Must Do More To Clean Up Its Governance 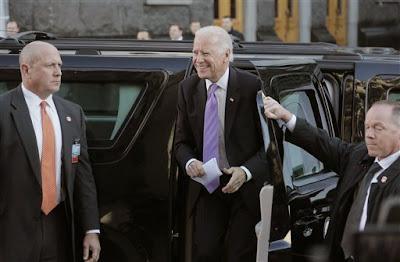 Biden, who arrived in Kiev on Thursday for a two-day visit, declared the two countries the closest of friends and said Russia would face “rising costs and greater isolation” if it does not stop assisting the separatists with military equipment and troops and “restore Ukrainian control over its own border.”

But in a joint appearance with Ukrainian President Petro Poroshenko, Biden focused most of his remarks on the need for Kiev to clean up its governance, economy and judiciary, and to end endemic corruption.

Once that happens, Biden said, international partners who have been reluctant to pour much-needed financing into the country will increase their help.

In private meetings with Poroshenko and Prime Minister Arseniy Yatsenyuk, Biden also again told the Ukrainians that the United States had made no decisions on the country’s long-standing request for lethal military equipment to combat the separatists, according to senior administration officials traveling with the vice president.

“They definitely talked about it,” said an official, one of several who spoke on the condition of anonymity about what went on in the closed-door meetings.

The Ukrainians have asked for antitank weapons as well as additional small arms and ammunition.

“There were no decisions today,” the U.S. official said.

The United States has provided Ukraine with about $118 million in nonlethal military aid since a popular uprising early this year toppled President Viktor Yanu­kovych, a Moscow ally, including such items as night-vision goggles and body armor.

More recently, Humvees and counter-mortar radars have been approved for shipment as violence has escalated between the Russian-backed separatists and government forces.

Nearly 1,000 people have been killed in the fighting since a fast-unraveling cease-fire was negotiated between Moscow and Kiev in September, the United Nations said Friday.

While Biden’s tone was friendly and supportive, he made it clear that the United States — which hailed last month’s parliamentary elections as a sign of Ukraine’s growing democratic maturity — is becoming impatient with political haggling and delays in the formation of a new government.

“Even if the guns in the east fell silent tomorrow,” Biden said, “Ukraine would still face a struggle for its democratic and economic future. . . . There’s a lot of work to do in Kiev.”

Progress will begin, he said, “with forming a new government — in days, not weeks,” followed by fulfillment of a reform agenda that includes stronger democratic institutions, greater integration with Europe “and resolute efforts to root out the cancer of corruption that has hobbled Ukraine for a long time.”

A second U.S. official said that “right now, actors as diverse as the U.S. Congress, the Europeans and the IMF [International Monetary Fund] are all looking at the Ukrainian government to see if there is one.”

However much the United States wants to help, the official said, it can’t “do it alone.”

The lack of reform momentum, he said, makes it difficult for the United States to convince reluctant potential partners, primarily in Europe, that they should support an enlarged financial aid package for Ukraine or additional sanctions against Russia.

Poroshenko said that lengthy negotiations since elections Oct. 26 had finally led to a new coalition agreement between his party and that of Yatsenyuk early Friday, just hours after Biden’s arrival.

“Within six days,” before the scheduled seating of the new parliament, “we have to . . . find all the compromises, all the factions that participate in the coalition process,” he said.

Once that is done, Poroshenko said, government representatives would “make a roadshow to present our reform program in Europe and the whole world.

And we have agreed about a very profound assistance that the United States and our European partners will be able to provide financially and otherwise.”

The ongoing turbulence in Ukraine after a year of political upheaval and Russian-backed separatist rebellion was underscored when Biden abruptly canceled a wreath-laying ceremony Friday at a memorial for those killed in the pro-Western revolution after an angry crowd gathered to demand justice.

Poroshenko, who was to meet Biden at the makeshift memorial near the scene of violent protests early this year, arrived ahead of time and was quickly surrounded by elderly women who said their sons were among the dead and by men chanting “Shame! Shame!”

Uniformed soldiers and presidential security personnel at the scene did not attempt to hold back the protesters.

When Biden’s motorcade arrived at the edge of the growing crowd, his U.S. Secret Service escort decided it was unsafe for him to leave his vehicle, and his motorcade turned back.

Later in the day, between lunch with Poroshenko and an anti-corruption roundtable with newly elected members of parliament, Biden made an unannounced stop to leave flowers at a separate memorial.