All Is Not Well On Ukraine’s Eastern Front

November 18, 2014
DONETSK, Ukraine -- What is Vladimir Putin’s game in eastern Ukraine? NATO reports that long convoys of unmarked military vehicles transporting heavy artillery and tanks, along with armored personnel carriers and trucks bearing rocket launchers manned by troops dressed in camouflage without identifying livery, have reinforced the pro-Russian separatist positions around the key Ukrainian cities of Donetsk and Luhansk. 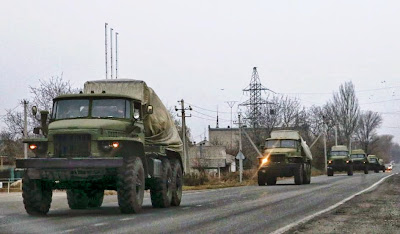 Unmarked military trucks drive along a road in a territory controlled by the self-proclaimed Donetsk People's Republic near the town of Khartsyzk, east of Donetsk, eastern Ukraine, November 15, 2014. International monitors deployed along the Russian border in eastern Ukraine say their drones were shot at and jammed days before new columns of unmarked soldiers and weapons, said by the West to be Russian, were seen in the rebel-held territory.

Kiev forces confirmed the sightings and, like NATO, accused the Russians of mounting the sort of stealth invasion that proved so successful when Moscow annexed Crimea last winter.

The Russians, meanwhile, indignantly deny that any of their forces have crossed the border, just as Russian President Vladimir Putin denied his forces had been sent to occupy Ukraine.

Mikhail Gorbachev, the last Communist leader of the Soviet Union, who presided over the defeat of the long and bloody failed experiment in Marxism-Leninism, thinks what is going on in Ukraine marks the start of a new Cold War.

But it could be even worse than that.

As the first cold blasts of winter bring the first flakes of snow, it is now a common belief on all sides that the fragile cease-fire in Ukraine will turn before long into a hot and bloody conflict that could drag the whole region—if not the whole world—into war.

The Russian convoys that recently crossed Ukraine’s eastern border did not take Kiev by surprise.

Border watchers there have predicted for a while that Russia would soon make a move, because to achieve its strategic goals it must act before the roads freeze and, most important, before Crimea, now firmly under Russian control, is iced in.

On November 12, the U.N. Security Council discussed the standoff in Ukraine for the 26th time.

And for the 26th time, nothing was decided.

But the debate threw up some new information.

An “offensive is expected in a number of locations along” the border between Russia and Ukraine, Yuriy Serheyev, the Ukrainian ambassador to the U.N., warned council members.

“We cannot exclude an attempt to create a land corridor from Russia to temporarily occupied Crimea.”

Few who heard Serheyev use the taunt “temporarily occupied” thought it anything but wishful thinking.

The prospect of the supply lines between Russia and Crimea being cut off is the key to understanding what drives Putin’s Ukrainian adventure.

When, on March 15, Crimeans voted in a Kremlin-orchestrated referendum, in which 96.77 percent of participants favored seceding from Kiev control and rejoining Mother Russia, there was a brief popular feeling of euphoria.

That is now a faded memory.

Observers from both Ukraine and the European Union say Crimea’s residents—including the thousands of Russian military that make up the occupation force, as well as those Russian sailors serving in the Russian Black Sea naval bases—are suffering from low morale since Russia took the peninsula by stealth last winter.

The prices of many staple food items have tripled.

Rampant inflation, caused by global sanctions imposed by the West to punish Putin for daring to redraw the post-Cold War borders, has added to the downward drift in Russia’s already ailing economy, driving the ruble to record lows.

In mid-June, the ruble traded at 34 to the dollar; at publication time, a dollar will buy you 48 rubles.

Putin has invested a lot in his Crimean gamble.

Delivery of food and other essential supplies by air, or by ship via the Black Sea or the Sea of Azov, is too expensive to sustain for long.

If Russian forces could instead exploit the unrest in eastern Ukraine to quickly take by force the coast road south, they may be able to carve out a land corridor, sealing Russia’s hold on Crimea.

Ukraine asked for the Security Council to convene as Russia’s reinforcement of arms and troops to the separatists was recorded by television news teams.

The Turtle Bay session was a classic demonstration of the U.N.’s impotence, in which Western diplomats, led this time by American ambassador Samantha Power, speak bluntly about Russian violations of agreements and international law while their Moscow counterparts deny any wrongdoing and accuse the West of fomenting violence.

“Time and again, Russia has made commitments and then failed to live up to them—and subsequently offered explanations to this council that it knows are untrue,” said Power.

She accused Russia of violating the agreements made in Minsk, Belarus, on September 5, when diplomats from Russia and Ukraine met with representatives of the pro-Russia militias in the eastern part of the country to carve out a lasting peace.

Everyone in Minsk agreed to a cease-fire, to be monitored by the Organization for Security and Co-operation in Europe (OSCE), along with measures to lower tensions on Ukraine’s border with Russia.

But on November 12, Michael Bociurkiw, spokesman for the OSCE’s Special Monitoring Mission to Ukraine, confirmed reports from European observers and the international press that dozens of vehicles had started moving across the border from Russia into Ukraine.

The vehicles were all “unmarked, with no insignia, no license plates,” he said, adding that the heavily armed troops tried to prevent reporters from shooting video footage of the convoys.

A major provision of the Minsk accords was an agreement by all sides to reduce armaments in the contested areas of eastern Ukraine.

Now, according to the OSCE, armaments are freely flowing in from Russia to bolster the rebels.

But as the convoys were unmarked, the OSCE could not say for certain that Russia was violating the treaty.

“We are here to observe. It’s up to others to draw conclusions,” Bociurkiw said.

Such a fig leaf of deniability, however thin, was enough for Russia to insist to the Security Council it was not breaking the Minsk accord.

Even before the latest invasion, Ukraine was “surrounded by a huge amount of armaments and troops,” Serheyev told the council.

Russia’s deputy ambassador, Alexander Pankin, replied that he had no idea where Serheyev was getting his numbers from, but the forces were on the Russian side of the border and therefore none of Ukraine’s business.

“Inciting such emotions at the Security Council, as if there is going to be some huge attack on Ukraine—that really does not help our constructive discussions, which we are all advocating for here,” he said.

But beyond such rhetoric, which at times became heated, no one expects the U.N.’s top body to act on the stealth invasion of Ukraine, any more than it did when Crimea was snatched from under Kiev’s nose.

Russia, after all, owns one of the five permanent seats on the council, along with the veto power that goes with it, which Moscow has made clear it will use if there is ever an attempt to curb its Ukraine maneuvers.

Diplomacy over Ukraine is stalled way beyond Turtle Bay.

Over the weekend, as the world’s 20 largest powers met in Australia, many of them berated Putin over Ukraine, and he left early, saying he was tired.

Earlier, Barack Obama and Putin barely managed to exchange pleasantries a week ago in Beijing when they encountered each other during a summit of members of the Asia-Pacific Economic Cooperation forum.

No discussions on Ukraine were attempted.

In lieu of meaningful diplomacy, Kiev is seeking to beef up its defense capabilities to fend off the Russian invaders.

America has so far declined to supply military assistance to the Ukrainian armed forces beyond purely defensive supplies.

Military officials in Kiev, however, hope that by early next year Washington will become more assertive and confront Russia, as the Senate leadership changes hands and as Senator John McCain, Kiev’s most powerful friend, who believes America should fully arm Ukraine, takes up the chairmanship of the Senate Defense Committee.

“I know how big and important it is for us to have political and moral support from our American partners,” Yuriy Lutsenko, a top adviser to Ukrainian President Petro Poroshenko, said recently on Ukrainian television.

But with Russia’s aggression, he added, “we will need to ask for a new kind of help [to] destroy the terrorist threat coming from Russia.… I have reasons to believe that the U.S. Senate will adopt a law to grant us lethal weapons, which we need now just as much as we need air to breathe.”

While Russian forces and their Ukrainian allies around Luhansk and Donetsk are expected to have a fairly easy time taking over territory from the Kiev irregulars holding on to key positions, such as Donetsk’s airport, they will find it heavier going as they move south toward Crimea, along the Sea of Azov.

Resistance is being built up around the key city of Mariupol, which Russia must capture if it wants to create a land bridge to Crimea.

Residents there, according to reports, are building fortifications to fend off the invading forces.

While the Ukrainians may not be a match for the much better equipped Russian army, clashes between the two sides are expected to be brutal and casualties heavy.

As the battles commence, chaos will reign in eastern Ukraine.

This may have been Russia’s intention all along.

The more chaotic the scene on the ground, the easier it is for Moscow to declare that its forces must intervene to calm the situation and defend Russian nationals in the region from Ukrainian aggression.

It appears there will be blood, and a lot of it, in Ukraine in the next few weeks.