With Stunts And Vigilante Escapades, A Populist Gains Ground In Ukraine

October 25, 2014
ROMNY, Ukraine -- As a lawmaker, Oleh Lyashko has the knack for self-promotion of a radio shock jock. 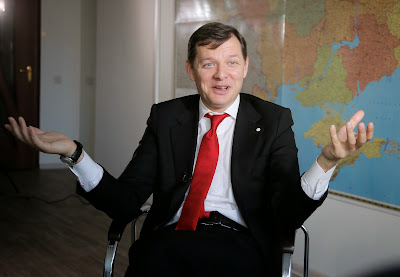 "Why do people support me? Because they see that I’m the same as they are," said Oleh Lyashko.

He has dumped a truckload of potatoes outside the prime minister’s office in support of Ukrainian farmers, tried to bring a cow into Parliament for a point about rural land rights and once appeared on television in a lingerie shop with a gaggle of women in their underwear, where he sniffed and squeezed one’s breasts (legislative purpose unclear).

And in March, after pro-Russian militants began laying siege to eastern Ukraine, Mr. Lyashko, the over-the-top leader of the populist Radical Party, strapped on a pistol and led heavily armed vigilante squads on missions to capture separatist leaders and humiliate them on camera.

In one escapade, he and his team seized a defense minister of the professed Donetsk People’s Republic, who was shown wearing only boxer shorts being interrogated by Mr. Lyashko in the back of a car.

In another, Mr. Lyashko turned venomously on a local police chief accused of collaborating with the separatists, asking, “Should I shoot you now or later?”

Now, having tapped into the raw frustrations of a society that is torn by war, pinched by economic problems and hungry for fiery new leadership — his party symbol is a pitchfork and supporters often carry them to his rallies — Mr. Lyashko seems poised to grab something far less familiar to him than attention: relevance.

In an interview, Mr. Lyashko (pronounced li-yahsh-KO) said that he expected to win as many as 40 of the 450 seats, and he is already demanding to be named the country’s next prime minister, on the assumption, perhaps wrong, that Mr. Poroshenko will need him to form a majority coalition.

“We discussed future coalition options,” Mr. Lyashko, 42, said this week at his office in Kiev, the capital.

“The president said that he sees me as chairman of Parliament in this future coalition, but I reckon we have both the force and opportunity to lead the government.”

The possibility that Mr. Lyashko, who is known for setting off fistfights in Parliament, might become speaker or prime minister prompts many of his critics and opponents to wince, as if the mere thought gives them physical pain.

The country has enough problems, they say; the last thing it needs is a pitchfork-wielding vigilante in a leadership post.

There have also been more serious allegations, including that volunteer battalions he helped establish in eastern Ukraine have been involved in illegal killings.

Critics also accuse him of railing against wealthy oligarchs while accepting money from them for his campaigns, and of not being honest about his personal life.

Mr. Lyashko has denied any connection to crimes or oligarchs and said that his opponents are constantly trying to smear him with all sorts of allegations.

He certainly has enemies.

On Wednesday, he canceled all of his remaining campaign events for the week after the state security service warned him of a planned assassination attempt.

In the interview, he said his critics in the establishment have it backward: They are the problem.

“I think I’m smarter than they are,” he said.

“They pretend to know everything, to know how to do everything, but we see the results of their politics.”

“My performance might look plainer, maybe primitive to some point,” he said.

“Better I be a populist than to be the authorities who are desperately different from people, and don’t understand people’s problems and how to solve them.”

It is not hard to grasp the appeal of his message.

As chief of the Radical Party, in a country that remains at war, and is suffering from more than two decades of government corruption and mismanagement, Mr. Lyashko calls for — no surprise here — “radical reforms,” including changes to end government corruption and force the wealthiest businessmen to pay their fair share of taxes, to rebuild the military, to increase salaries and pensions, to join the European Union and NATO, to end Russian influence, to stop borrowing so much from the International Monetary Fund and other foreign creditors.

The wish list is long, with few explanations of how to afford or accomplish it.

“To save our country, we need to act quickly and forcefully,” he said.

Perhaps most controversially, he calls for rebuilding Ukraine’s nuclear arsenal, once the world’s third largest after the breakup of the Soviet Union.

Ukraine gave up its nuclear weapons as part of an agreement in 1994 with the United States and Russia that called for respecting Ukraine’s borders and territorial sovereignty — an accord breached by Russia’s annexation of Crimea.

Alyona Hetmanchuk, the director of the World Policy Institute, a political research organization in Kiev, said Mr. Lyashko was filling a populist niche once dominated by former Prime Minister Yulia V. Tymoshenko, who has fallen out of favor with voters.

Ms. Hetmanchuk said that his appeal was strongest among rural, less educated voters, and that he was running against the political establishment, though he is actually a part of it.

“People are mainly frustrated, and they want to fight,” Ms. Hetmanchuk said.

“And Lyashko is the best embodiment of fighting. For many Ukrainians, this fighting is a sign of patriotism.”

The first sign that Mr. Lyashko was gaining new traction was in May, when he threw himself into a bid for the presidency.

He finished third, with 8.32 percent of the vote.

Mr. Lyashko was born in Chernihiv in northern Ukraine, but he grew up mostly in Luhansk, in the now rebel-controlled east.

His parents separated when he was 2, and his mother put him in an orphanage, where he spent much of his childhood.

He graduated from Skovoroda Kharkiv National Pedagogical University, but he often speaks with the simple diction of a Ukrainian villager, which he admits to accentuating for political effect.

“Why do people support me? Because they see that I’m the same as they are,” he said.

“This is a secret of our ratings, because you need to communicate with people in a way they will understand.”

Mr. Lyashko also embraces the pitchfork symbol, and he said he is not at all unnerved by supporters carrying pitchforks to his rallies, as Vasyl G. Radul, 78, a retired electrician, did here in the town of Romny this week.

“He’s a fair man; he demands what we demand,” said Mr. Radul, who had attached a picture of Russia’s president, Vladimir V. Putin, to his pitchfork and said he wanted Ukraine’s former officials brought to justice.

“We’re simple people, and we demand this: that there be freedom everywhere and affordable prices everywhere, and that those who punished us will be in prison and not hiding in Russia.”

Mr. Lyashko’s critics can be every bit as passionate as his supporters.

Some dismiss him as a liar and a charlatan.

Earlier in his career, when he was a journalist for a government-owned publication, he was charged with embezzlement of public funds, convicted and sentenced to six years in prison.

He was pardoned and released after one year, and his record was later expunged.

He was first elected to Parliament in 2006 as a member of the Fatherland Party led by Ms. Tymoshenko.

In 2010, a videotape was leaked that appeared to show Mr. Lyashko being interrogated in 1993 by a prosecutor in the embezzlement case and describing having a sexual relationship with a male supervisor.

The recording seemed to confirm longstanding rumors about his personal life.

Shortly afterward, he left Fatherland, though the party said there was no connection.

Mr. Lyashko, who is married and has a 12-year-old daughter, has repeatedly called the video fraudulent and denied that he is gay, but with homosexuality not well tolerated in Ukrainian society, some critics say he has gone overboard in his denials, by posting a picture on Facebook of himself shirtless in a romantic pose with his wife, and by going on television shows like the one in which he judged women’s breasts.

Mr. Lyashko said rivals are always trying to smear him.

But he also said being controversial is necessary to win news media attention without having to pay for it, and he admitted that some of his stunts were intended to titillate.

“There are two ways to get on TV, either for money or to create events,” he said.

“As we do not have money, and we didn’t have it, that is why I had to choose the kind of politics that create events.”

Unknown said…
The Commend center of self proclaimed LNR is in Alchevsk as of Today.
11:28 PM