October 16, 2014
KIEV, Ukraine -- With its war-torn economy threatened by further Russian disruptions, Ukraine is in desperate need of a new international financial aid package, economists say, but none appears imminent. 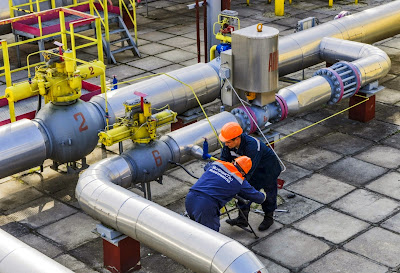 Employees of Ukrtransgaz, a unit of Naftogaz, Ukraine’s state-owned gas monopoly, work on pipes at the Opary underground storage facility. Energy is among the sectors of Ukraine’s economy that are struggling after months of conflict.

The International Monetary Fund’s $17 billion package in May was not designed to compensate for the effects of months of fighting between Ukraine’s military and Russian-backed separatist forces.

In addition to military costs, lost tax revenue and the dire need for infrastructure repair, Ukraine faces a crisis of confidence that is driving capital flight and a decline in its currency.

He said Ukraine’s banks are fragile, the budget deficit is more than 10 percent of gross domestic product, and the economy could shrink by as much as 10 percent, greater than the current IMF estimates.

Ash said that there were “lots of warm words for Ukraine but not many greenbacks” from the United States or the European Union, which is mired in its own economic stagnation.

Ash said in an e-mail that on an official visit to Washington recently, Ukrainian President Petro Poroshenko “gave the speech of his life and got $53 million, which is small change. That funds the cost of the war in the East for 9 days.”

That fighting has disrupted the entire eastern part of the country, crimping business and tax receipts.

Mikhail Afendikov, chief executive of Cub Energy, an exploration company, said his firm is drilling only four gas wells in eastern Ukraine instead of 18 as planned.

Two-thirds of Ukraine’s coal production comes from the strife-torn Donbas region, and output there has fallen by half.

Bridges and railways have been damaged.

“The hope is that the new government . . . can provide that reform blueprint, and the West stumps up enough cash to give those reforms a real chance,” Ash said.

In the most important sector — energy — a new chief executive was installed several months ago at Naftogaz, the state-owned natural gas monopoly.

In an interview, he urged the government to cut consumer and industrial subsidies starting Jan. 1 to slash waste, reduce imports from Russia and boost Ukraine’s own gas output.

“This is something we need to tackle,” said Andriy Kobolyev, chief executive of Naftogaz.

“There is no option to extend and pretend, pretending that we can continue this way. The sooner we implement changes, the sooner we can become financially viable.”

Because of these subsidies, Naftogaz expects to run a deficit of 7.4 percent of GDP this year, Kobolyev said, more than the government’s expenditures on any other budget item.

Although huge numbers of households cannot afford to pay market prices for gas, Kobolyev said that it would be better for the government to free prices and then provide direct payments to those truly in need.

That would prevent subsidies from going to those who do not need them and would provide an incentive for wasteful households to trim consumption.

Ukraine uses more energy per unit of GDP than all but two countries.

While Kobolyev acknowledged that many believe that eliminating the subsidies cannot be done overnight, he added, “We’ve been talking about it for the last 23 years” since Ukraine became independent of the former Soviet Union.

He said a desire to undercut the influence of Russia, the source of most of Ukraine’s gas imports, might help.

Ukraine’s economic instability is undermining the efforts to end subsidies.

With the urging of the IMF, the government has raised gas prices for certain customers by as much as 40 to 50 percent in the local currency, but the price in dollars has decreased because of the plunging Ukrainian currency, Kobolyev said.

Eager to avoid an even greater crisis of confidence, the Ukrainian government has been making debt servicing a priority over other spending claims.

While waiting for pricing changes, Kobolyev has been busy trying to clean up other problems plaguing the state gas company, including getting rid of middlemen who allegedly have been stealing hundreds of millions of dollars from the company.

He blamed RosUkrEnergo for $300 million of costs “for nothing.”

He has also proposed forcing a fertilizer company controlled by Dmitry Firtash to find its own gas sources.

Firtash, who ran RosUkrEnergo, is fighting U.S. bribery charges and was freed in Austria on $170 million bail posted by a Russian friend after his arrest by Austrian authorities on an FBI warrant in March.

The shadow of Russia — the source of 30 percent of European natural gas — hangs over all this.

Kobolyev said that he expects Russia to curtail its shipments of gas to Ukraine, resulting in a possible 20 percent shortfall in supplies — and Ukraine’s gas storage facilities are only 54 percent full.

Some of Ukraine’s shortfall could be filled by other European countries by reversing the flow in pipelines that historically have carried Russian gas across Ukraine to Europe.

Most of that reverse-flow gas originated in Russia and came through other pipelines.

Early this month, Norway’s Statoil agreed to sell gas to Ukraine through Slovakia.

Volumes were not disclosed, but pipeline bottlenecks will limit sales.

Russia has tried to prevent reverse-flow sales by threatening to trim, or actually trimming, its supplies to countries such as Poland and Slovakia.

Two weeks ago, Gazprom delivered only half of what Slovakia wanted for three days.

The Polish gas company PGNIG said Friday that the Russian gas monopoly, Gazprom, had not provided all of the gas PGNIG had requested but that Polish consumption has been satisfied by domestic production, the lower level of supplies from Gazprom and imports from countries west of Poland.

“No transit through Ukraine this winter; this is what we expect, and that is what we’re preparing for,” said Vaclav Bartuska, the Czech ambassador at large for energy security.

But he warned that Europe will adapt by finding more reliable sources of gas, or other energy.

Facilities designed to import liquefied natural gas are at about 40 percent of capacity, Bartuska said.

If Russia makes deep supply cuts, “we will have one or two difficult winters, but then Russian gas will be dead in Europe for a generation,” he added.

Negotiations are still going on between Ukraine and Russia.

Kobolyev said that Naftogaz is looking for a market price only.

Although Russia has complained about subsidizing Ukraine, but it is in fact demanding a premium over prices paid by Germany, and Russia has rarely discounted gas sales to Ukraine.

Bartuska said that spot prices for gas have been running at about half the price Gazprom has been demanding in talks with other European nations.

Final prices depend on Gazprom’s bargaining power, with large customers such as Germany’s big utilities getting better deals.

He said that Germany pays about half the price Latvia does.

Russia and Ukraine are also fighting each other in a Stockholm arbitration court, with Gazprom claiming it is owed $5.3 billion and Ukraine claiming that it has lost assets in the annexation of Crimea.

Russia, which says it pulled back some of its troops engaged in exercises near its border with Ukraine, still has other ammunition.

If, or when, Ukraine’s debts exceed 70 percent of GDP, Russia can demand repayment of $3 billion of bonds.

Ukraine would most likely draw that amount from IMF funds.

“Suffice to say that again Russia’s strategy will be to make life as difficult as possible for any pro-Western administration in Ukraine,” Ash wrote in a note to clients.

Meetings are scheduled over the next week.

But if Russia is trying to ease pressure on Ukraine’s economy, the whiff of compromise has not reached all parts of the Russian government, which this week said it would ban imports of cheese from Ukraine.