October 26, 2014
KIEV, Ukraine -- Ukraine's first female combat helicopter pilot is running for parliament despite being held in a secure psychiatric unit in Russia. 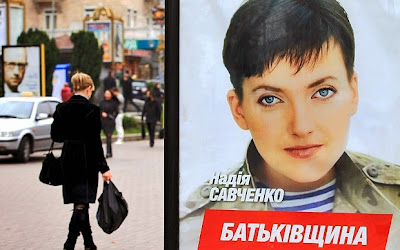 A woman passes an election poster with a portrait of Nadia Savchenko, in Kiev, Ukraine.

A Russian psychiatric ward is an unlikely base for a career in Ukrainian politics.

Yet a female army helicopter pilot is contesting Sunday's parliamentary election in Ukraine from a secure unit over the border in Russia.

Despite her enforced absence from her country, Nadia Savchenko dominates the election billboards of the Fatherland party.

Once, these posters would have displayed the golden braids of Yulia Tymoshenko, the party's leader and one of Ukraine's most recognisable figures.

The fact that Miss Savchenko now appears in her stead demonstrates the change wrought on Ukrainian politics by a tumultuous year of war and revolution.

Established figures from the old order are being challenged by a new generation emerging from the turmoil of 2014.

Miss Savchenko, 33, was captured in June while fighting pro-Russian separatists in the east.

She was taken to Russia and imprisoned on what she says are fabricated charges of war crimes, before being transferred to a psychiatric unit.

The case has made her a national hero in Ukraine, with President Petro Poroshenko joining the calls for her release.

It has also made Miss Savchenko a sought after candidate in Sunday's election.

"We received a lot of offers from a lot of parties," said her sister, Vera, who lives in Kiev and is also running for parliament.

"So, via the lawyers, we spoke to her and agreed we would go with the one she trusted most. She chose Tymoshenko because she likes her, she used to vote for her."

If Miss Savchenko is elected, supporters hope that Vladimir Putin, the Russian president, will be more likely to release her.

Miss Savchenko is among dozens of insurgent candidates running against the old order.

The most prominent include Mustafa Nayem and Serhiy Leshchenko, two investigative journalists who specialised in exposing corruption before agreeing to run for Mr Poroshenko's parliamentary party.

Yuli Mamchur, the air force colonel who marched unarmed against the Russian soldiers who took over his Crimean airbase in March, is also a candidate with the new pro-European party formed by Mr Poroshenko, which is expected to dominate the new parliament with perhaps 40 per cent of the vote.

Others hoping for a seat include paramilitary leaders like Andrei Belitsky, the commander of the far-right Azov battalion.

In all, up to a quarter of the seats could go to new candidates with little political experience, challenging the old patronage systems that have dominated Ukrainian politics since the country's independence in 1991.

Both Savchenko sisters were in Independence Square in Kiev at the climax of the revolution, with Nadia in the thick of the action.

She was a career soldier who made history by becoming Ukraine's first female combat helicopter pilot.

She served in the Iraq war and her military experience was valuable during the bloody days of the revolution.

A similar sense of duty later took her to eastern Ukraine.

Frustrated at not being deployed with the regular armed forces against pro-Russian rebels, Senior Lieutenant Savchenko took leave from her squadron and travelled east, where she served with the Aidar battalion, one of several volunteer militias.

On June 17, Miss Savchenko was cut off and surrounded during a chaotic battle.

She was captured by separatist fighters loyal to the self-proclaimed "Luhansk People's Republic".

Three weeks later, she appeared in Russia, where prosecutors said she would be charged as accessory to murder for allegedly directing a mortar attack that killed two Russian journalists.

Miss Savchenko's defence team say that witness testimony and mobile phone location data show that she was too far away to have directed this mortar fire and, in any event, that she was captured up to 90 minutes before the journalists were killed.

But that will make little difference in court, said Ilya Novikov, her Russian defence lawyer.

"The only way she will be released is by personal decision of Vladimir Putin. And given that, we think her participation in the elections can only help."

Mr Poroshenko is understood to have raised her case with Putin during the negotiations that led to a ceasefire agreement in eastern Ukraine on September 5.

But Ukrainian officials say the Russians rebuffed a request for Miss Savchenko to be included in a prisoner exchange, saying that she had become too valuable for Putin to release.

Her sister suspects that Mr Poroshenko has not done his utmost to secure Miss Savchenko's freedom.

"It suits the president – it suits the political establishment – to have a martyr," said Vera Savchenko.

That mistrust exposes the simmering tensions running through postrevolutionary Ukraine.

Many who helped to bring down the old government feel that the reforms they stood for have stalled.

Mr Poroshenko backed the revolution and won the presidency by a landslide in May.

But he is also a political insider and billionaire businessman.

Many feel that he represents the interests of the very establishment they were trying to overthrow.

Some are deeply disillusioned, pointing to his failure to end the war in the east and purge officials guilty of wrongdoing under the previous regime.

Last month frustrations boiled over when members of Right Sector, a nationalist group, began to publicly humiliate supposedly corrupt officials by throwing them in trash bins.

In a country awash with guns, the dangers of another revolution are obvious.

Some point to the rise of Oleh Lyashko, a maverick politician who has used the crisis in eastern Ukraine to build a potent political brand out of vigilante justice.

A political irrelevance just a year ago, his right-wing Radical Party is now vying with Fatherland for second place in the vote.

But the level of resentment is difficult to gauge.

Mr Leshchenko and Mr Nayem, the crusading journalists turned politicians, both play down the nightmare scenario, in which disgruntled soldiers and volunteer battalion fighters turn their guns on Mr Poroshenko's government.

They fiercely reject accusations that anyone running in today's election for an established party has sold out.

Nadia Savchenko, meanwhile, is unlikely to be released soon.

In Kiev, her sister fears that Ukraine's new MPs may lose their battle against the old order.

"They will destroy us if they can. By 'they' I mean the political establishment, and by 'us' I mean young Ukrainians, our generation who see a way of living differently, of bringing the country back to Europe, of simply creating conditions to live in," she said.